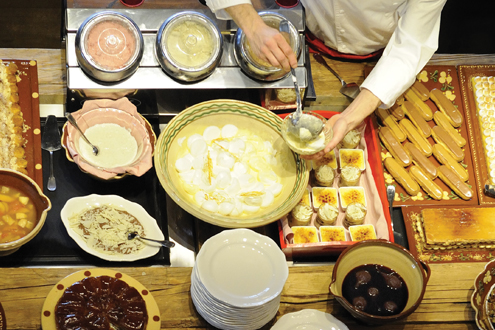 Linguistic maverick, internet nomad, and intrepid futurist Clif High believes that we can write our own future through our uses of language. Elusive, High’s virtual demeanour plays a cool hand, and he has his followers, many of whom frequent the upper echelons of various nation states and companies. High claims his data prophesized 9/11 and he maintains beliefs that as a species we are all collectively psychic. The question is: could he and his methods be on to something at the fringe of linguistic studies?

High collects data with his own web bots, scouring the internet for content. The collected content is scanned and rated for “emotive” value. Running algorithms of his own creation on the “emotively rated” data, High creates reports based on his results. He contests that while there are other companies trying to mimic his certain brew of data evaluation, they don’t have the years of experience that he does in surveying and analyzing the data to make adequate predictions. His contention is that deep in the data – manifested in corpus beyond corpus of internet language usage – lies our potential future… already written by us. Claiming predictions that his data foresaw 9/11 and the Japanese earthquake of 2011, High seems certain other catastrophic events are ahead for the next ten years, unless things change — through language use.

Extraordinary as they may seem, Clif’s techniques share some features with everyday search engines like Google. Data, collected by “spyders” that trawl the internet for content, is measured for “tension,” and matched with particular keywords of different emotive values. High says, “My process works by way of the delta of language expressed in common contexts over time reduced to archetypes and projected forward based on numeric quantifiers.” After various procedures to map the data from its sources, High identifies prominent themes — and postulates these themes reflect our collective current thinking as ways of opening doors to our thoughts in future contexts.

High is a risk taker, selling his results for $10 a slice to his following band of fellow pie-eaters. He keeps his techniques close to his chest to avoid their use for destructive means, and chooses only to deliver necessary broadcasts through his website. Despite his mysterious internet radio presence, High — who refers to himself as a time monk, maintains that the future of our natural, political, and economic world is within our control; and that a bold reflection of what is to come can be found in the realms of our language usage. If language use can predict the future, it can thereby alter the future. And this changes everything.

There can be big money in controlling the future.

These unconventional methods have a mixed worldwide reception. Whilst organizations in the West have begun to adopt such techniques for corporate use, the Chinese government has blocked his website halfpasthuman.com on grounds of “superstition.”

High believes that the words we use can change the world we live in. “Language, in all its forms… will be actually propelling human civilization changes this year” he remarks. “Linguists will be frequently commenting on their ‘wonder’ and ‘awe’ over the developing nature of language in our solar system.” As the past 10 years have seen a building anticipation of change in the English language alone, Clif considers the notion to be a more global affair. His findings are affected by new “flows” or worldwide varieties of language and thus he tailors his data searches appropriately — “there are about forty different languages being sampled now” — including several varieties of English, Cyrillic, and Sanskrit languages.

Crediting his schooling in a post-second world war Europe for his fascination with language, High maintains that his years as a computer programmer led him to his alternative means of analysis. However, in today’s society which constantly demands evidence and validity, he has to prove himself. Clif explains, “All humans are psychic… we are standing waves that can be considered as ‘antenna’” — implying our collective actions as a species transcend the conscious mind. He adds “One manner is in word choices… thus the events outside our control are not outside our perception,” and that this notion leads us to predictions of events beyond our control, thus bridging the gap between predictions of language compared with those of natural disasters.

Maintaining a positive attitude and faith in the “thinking public and the powers that be” as the “overwhelmingly negative” emotive values associated with many of his data finds, High is yet to be discouraged and continues his work producing predictions for the next decade. Is his work the making of quantum linguistics? “None that can be let out into the wild at this time,” he says.

For now, only time will tell if a “standing wave” can help predict a sea change in current thinking.
In the meantime, enjoy your pie.

Athina Kontos is a regular contributor to Language Magazine. Clif High’s research can be found at halfpasthuman.com. The entire interview with High is available here at https://languagemagazine.com/?page_id=4066.