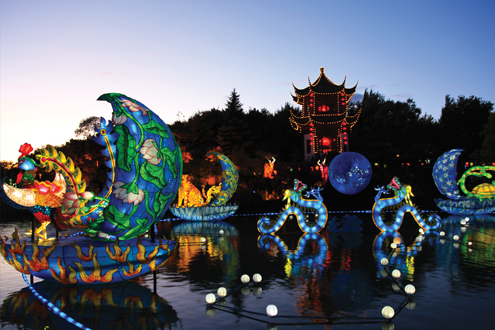 Language Magazine goes in search of where French is well said

Montréal is famous for fabulous festivals, sizzling nightlife, European charm, and North American energy. Canada’s second largest city is a bilingual city and a unique destination that gives you the opportunity to study and practice both French and English while enjoying its cosmopolitan, international atmosphere.

ALI
ALI (Académie Linguistique Internationale) is located in the heart of downtown Montréal. Students can choose both English and French language programs, participate in many extra-curricular activities and excursions, and stay with an English or French speaking family, or choose an apartment style shared residence. The academy offers quality programs, modern, spacious facilities with scenic views, and a great location. Students can also take advantage of the unique option to study French or English, and receive free classes in the second language. Course options include: general French and DELF, business communication courses, andinternships. ALI also organizes many exciting activities and excursions that students can enjoy year-round, including eating the fine French and international cuisine in Montréal’s world renowned restaurants or exploring the night life on pub night, seeing the city from the lookout at beautiful Mount-Royal park, exploring colonial Old Montréal, or seeing the Canadiens hockey team.

Bouchereau Lingua International
Founded in 1976, Bouchereau Lingua International (BLI) has schools in Québec City and Montréal. Sitting on the banks of the Saint-Lawrence River, Québec City is one of the most picturesque cities in the world. Founded in 1608, it is the cradle of French civilization in North America. Québec City is rich in history, architecture and traditions with a genuine European appeal. Students will appreciate its pedestrian streets, excellent restaurants, and numerous cafes. Québec City was proclaimed a UNESCO World heritage in 1985. B.L.I. is located in the heart of Québec City, in the new and dynamic Quartier Saint-Roch, very close to Old Québec and its monuments, attractions and conveniences, such as the Château Frontenac, the Old Port, Place Royale, The Museum of Civilization, the Museum of Québec, the Fort Museum, the Naval Reserve Academy, the bus terminal (for trips in Canada and to the US). Depending on the season, you can attend either the Québec Summer Music Festival, le Cirque du Soleil, or the Québec Winter Carnival. There is an excellent network of bus routes throughout the city. BLI hosts students from more than 30 countries in small groups allowing a maximum of oral communication. In the Montréal school, BLI also offers private courses or preformed groups, all year long.

Collège Saint-Charles Garnier
Collège Saint-Charles Garnier, located in Québec City, is a private, co-educational secondary school. Founded by the Jesuits in 1635, it is the oldest French speaking teaching establishment in North America. The educational plan and the diverse programs on offer show that the College’s vision, while based on a solid tradition, is turned to the future and the world. In keeping with its motto, “Truth is My Shield,” and its aim to educate men and women for others, the mission of Collège Saint-Charles is to cultivate a passion for truth and a sense of solidarity. Part of this mission is the discovery of different people and cultures through improved language skills. CSCG offers different programs in French immersion in Québec City; all of them take into account the emotional side of this international experience, for students and their families alike.

French high school studies (one-year or six months): the Collège Saint-Charles Garnier opens its doors to international students from 12 to 17 years of age from all over the world. Our aim is to develop humanistic values while respecting cultural differences. The international students attend regular classes in French with the Canadian students but they will also take FSL (French as a Second Language) classes specially designed for their pedagogical needs. Since the main goal is total immersion, students live with a French speaking host family, helping them to learn and understand the Québec culture.

En Français à Québec: this summer program is designed for youngsters between 14 and 17 years old. The participants are housed in student residences on the campus of Laval University in Québec City for five weeks. They also take advantage of the many extra-curricular, cultural and educational activities offered. The collegs offers school groups (students or teachers) the chance to visit Québec City as part ofa language immersion program tailored to their needs and schedule. Participants stay with host families and take language classes in the morning. The afternoons are devoted to discovering Québec City through tourism and cultural workshops and outings.

L’École internationale de français
L’École internationale de français (ÉIF) at the Université du Québec à Trois-Rivières is a university department which offers French language training. The ÉIF has a team of competent professors, dynamic group leaders, and programs designed to provide students with the ability to communicate effectively in French with an emphasis on written and oral skills. Located on the shore of the St-Lawrence River, Trois-Rivières offers learners a marvelous lesson in history as well as a lovely site for total immersion in French. A diverse sociocultural program helps students become part of Trois-Rivières — a safe city surrounded bynature.

University of Québec — Chicoutimi
Since its founding in 1975, the École de la langue française et de culture québécoise at the University of Québec in Chicoutimi has built itself an enviable reputation based on solid expertise and numerous training features. The École de langue offers students instruction as well as the opportunity to completely immerse themselves in the Québec culture by participating in various cultural, social and tourist activities. Accommodation with a host family is also strongly recommended in order to stay in close contact with the French language and the Québec culture.

University of Montréal
The Language School of the Faculté de l’éducation permanente at the University of Montréal offers courses in French as a second language every session and at every level. A number of course schedules areavailable: evenings, Saturdays, and regular or intensive courses.
The French courses also can be incorporated into a program of studies such as that of the Certificate in French as a Second Language or the French as a Second Language concentration of the Certificate of Individualized Studies. These certificates can lead to a Bachelor’s degree through the association of programs. For over 60 years, the Language School has been recognized internationally as a center of excellence for the teaching of French. More than 5000 students from around the globe register each year for their courses in French as a second language.