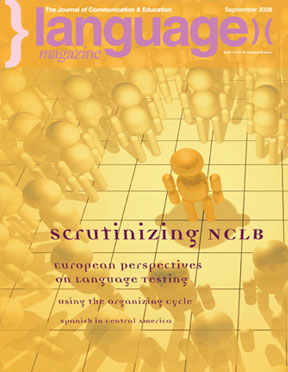 Closing the achievement gap between English language learners and their English mother tongue counterparts is one of the greatest challenges to face our generation. Initially, President Bush’s flagship education policy, the No Child Left Behind Act, inspired optimism that it would live up to its name. However, results show that the gap is not closing, largely thanks to the underfunding of the Act, and its system of penalizing the schools and districts that need the most help.

Seventy-eight percent of whites graduate from high school on time compared to 52 percent of Hispanics and 44 percent of African-Americans. From state to state, average per-pupil expenditures can vary by more than $5,000 and average intra-state, district-to-district spending differences can be as great as $900 per pupil.

Such disparities are provoking reformers to rethink the structure of educational funding. The “Fund the Child” plan, proposed by the Thomas B. Fordham Institute, is supported by a bipartisan group of national education leaders, including Rod Paige, two other former U.S. secretaries of education, and Delia Pompa, vice-president for Education at the National Council of La Raza, and former executive director of National Association for Bilingual Education.
Under the proposal, federal and state funding would follow a child to his or her public school. The weighted student formula would begin with a basic calculation for the allocation of dollars per pupil. Weights for a number of criteria like economically disadvantaged students, students with disabilities, or with limited English proficiency would then be applied to the formula to ensure that the individual needs of each student was supported. The heavier the weight, the more funding directed to the child. The districts and states implementing the formula would determine the categories and weights to be applied.

The plan also proposes that funds follow the child to his or her school in spendable dollars. This would enable schools to spend the money in the way that they think best meets the needs of each child.

The weighted student formula may change the way we think about student populations, and consequently how we serve them, as it will create powerful incentives for schools to better serve disadvantaged learners.

Adequately funding schools is a perennial problem, and “Fund the Child” may not be the right solution. However, the inequities of the present system must be addressed now if we are to have any chance of closing the achievement gap, so all reform proposals, no matter how radical, need to be considered. If we fail to change the status quo of under-achievement by disadvantaged minorities, we will only have ourselves to blame for the social time-bomb that we will have created for the next generation.

World Views
Domenico Maceri contrasts our perceptions of different generations of immigrants to the U.S.