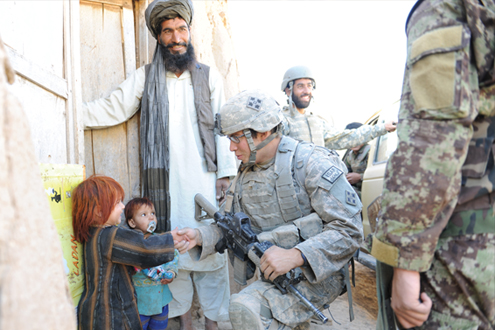 “Weapons were being trained onto targets and a tense situation was quickly turning into a deadly one…a lot of Afghan and American troops were about to open fire on each other,” said Spc. Robert Masterson, a cavalry scout with the 4th Infantry Division.

On a dark and lonely road in the western deserts of Afghanistan, a hot wind is blowing sand in the face of Masterson as he comes upon an Afghan National Police [ANP] checkpoint near the Baghdis Province border in western Afghanistan.

The checkpoint guards were nervous and on high alert, ready to stop any insurgent threat that came across their path. Unfortunately for Masterson, it was too dark to physically show the ANP that they were allies and the unit’s civilian interpreter was paralyzed with fear and couldn’t speak.

“Because our interpreter choked up, I kind of took the lead and called out to the checkpoint and told them ‘Hey, it’s us, don’t fire! Were Americans!’ explained Masterson. “Once they heard me and realized everything was okay, things calmed down. I am thankful that just because I had some language skills, I was able to diffuse the situation and things didn’t end up tragically,” said Masterson.

Nine months before their deployment, the 1st Brigade Combat Team, 4th Infantry Division was notified that they were going to spend a year in Afghanistan. Nine months is considerably less time than units usually have to prepare for a deployment. The Brigade Commander, Col. Jeff Martindale had to make some fast decisions and one of those decisions was to contact the Defense Language Institute Foreign Language Center to incorporate language and culture training into the rotation.

“We cut some other training to be able to do the language and culture training and I am glad that we did,” said Col. Jeff Martindale, commander of the 4th ID 1st BCT.

During the Brigade’s after action review immediately following deployment, interviews were done by Defense Language Institute Foreign Language Center (DLIFLC) personnel to determine how the language and culture training came in handy.

“The training gave the soldiers more confidence and a baseline to be able to build from once they got to Afghanistan,” said Martindale.

“In the first couple of months of deployment, many of the 4th ID troops were introduced to their combat partners within the Afghan National Security Forces [ANSF]. They had to eat, sleep and fight right alongside them,” Martindale explained.

According to Spc. Christopher Campbell, a saw gunner deployed to Kandahar, knowing the culture was as important as having some language skills.
“The cultural awareness training opened my eyes to a broader perspective. I learned what I should do or not do to give them the respect they deserve,” said Campbell.

According to Campbell, overall safety was improved by having the basic language skills.

“I focused a lot on basic commands. If an individual was approaching us it was important to be able to say things like ‘Wait!’, Stop there!, Don’t move’, and it created a safer environment for me and the civilians we were working with,” Campbell said.

With the experience of commanding a combat brigade during a full-year deployment under his belt, Martindale encourages others to take advantage of the training that DLIFLC has to offer.

“I would tell other commanders to start early in the training cycle and identify the guys that are going to be out there for the deployment who want to learn the language, which is key. The training that we received was vital and could have been even better if we had started training earlier,” said Martindale.