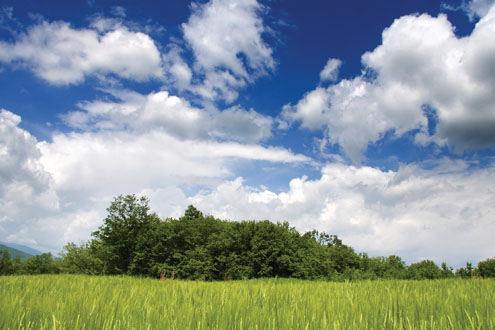 Most of us cannot remember learning our first word, but Helen Keller recalled that event in her life with a flashing vividness. She remembered because she was deaf, mute, and blind from the age of nineteen months and did not learn her first word until she was seven.

When Helen was six, an extraordinary teacher named Anne Sullivan (1866-1936) entered her life. Anne was poor, ill, and nearly blind herself, but she possessed a tenacious vitality that was to force her pupil’s unwilling mind from the dark, silent prison in which it lived: “Before my teacher came to me, I lived in a world that was a no-world. I cannot hope to describe adequately that unconscious yet conscious time of nothingness. I did not know that I knew aught, or that I lived or acted or desired.”
In The Miracle Worker, playwright William Gibson shows us what happened when Anne Sullivan first met Helen’s mother:

Mrs. Keller: What will you teach her first?
Anne: First, last, and in between, language.
Mrs. Keller: Language.
Anne: Language is to the mind more than light is to the eye.

The miracle that Anne Sullivan worked was to give Helen Keller language. Day after day, month after month, the teacher spelled words into Helen’s hand. Finally, when Helen was seven years old and working with her teacher in the presence of water, she spoke her first word. Years later she described that moment in The Story of My Life (1902): “Somehow the mystery of language was revealed to me. I knew then that “w-a-t-e-r” meant that wonderful cool something that was flowing over my hand. That living word awakened my soul, gave it light, hope, joy, set it free!… I left the well-house eager to learn. Everything had a name, and each name gave birth to a new thought.”
Anne Sullivan described the moment this way: “My heart is singing for joy this morning! A miracle has happened! The light of understanding has shone upon my little pupil’s mind, And behold, all things are changed!”
Not only did Helen Keller learn to speak, write, and understand the English language. She graduated cum laude from Radcliffe College and went on to become a distinguished lecturer and writer. But perhaps the most poignant moment in her life came when, at the age of nine, she was able to say to her teacher, Anne Sullivan:
“I am not dumb now.”

Richard Lederer, M.A.T. English and Education, Ph.D. Linguistics, is the author of more than 35 books on language, history, and humor. Explore his web site www.verbivore.com. Write him at [email protected]
This is an excerpt from A Tribute for Teachers, to be published by Marion Street Press in July 2011.