New study shows that babies learn language best from speakers that sound like their caregivers. 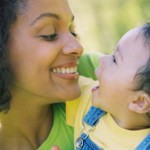 The study explained that bilingual speakers have an accent in both languages that they speak, which is not detectable among adults, but that a child acquiring language can detect. Ultimately, children learn language best from the speakers who “sound like Mommy,” while all the participating infants had difficulty processing minimal pair words when listening to the speaker whose language did not match their home language-learning environment. Neither monolingual nor bilingual babies had an advantage.

The findings present interesting implications for researchers who study infants and language acquisition: if the speakers in a study don’t sound like the caregivers in the baby’s home environment, the results may differ from scenarios in which the speakers do have the same accent as the caregivers. All babies, whether monolingual or multilingual, are highly attuned to their home language environments.