Merriam-Webster named culture in all of its definitions as its word of the year for 2014, saying that culture was a “big word at back-to-school time each year, but last year lookups extended well beyond the academic calendar.” The company chooses its word of the year based on a set of criteria that includes the number of online searches for a particular word and how much those searches rose from the previous year.

In 2014, the word moved beyond its academic or classroom usage to “the conversation at large, appearing in headlines and analyses across a wide swath of topics,” according to the famed dictionary publisher.

Merriam-Webster’s primary definition of “culture” is the “beliefs, customs, arts, etc., of a particular society, group, place, or time.” Other definitions include “a particular society that has its own beliefs, ways of life, art, etc.” and “a way of thinking, behaving, or working that exists in a place or organization (such as a business).”

In the UK, the Oxford Dictionaries named vape 2014’s word of the year, defining the verb as “to inhale and exhale the vapor produced by an electronic cigarette or similar device.” It was added to the dictionary in August. Vape can also be used as a noun for the e-cigarette and for the act of inhaling itself. 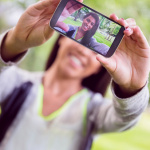 Selfi was named Spain’s word of the year by the Fundéu BBVA, a bank-funded, non-profit group that promotes the proper use of the Spanish language by Spain’s media. The foundation chose the noun from a list of possible contenders which included the neologisms dron (drone), postureo (posturing) and nomofobia, or the fear of being out of mobile phone contact.

“We aren’t looking for the most beautiful word, or even the most original or novel,” Fundéu BBVA director Joaquín Muller said of the choice of selfi. “What we want with our word of the year — apart from being current and therefore used frequently in the media — is that (the word) has a certain linguistic interest, whether it’s because of its formation of because of the way it has been become part of everyday language.”

The ubiquitous selfie, widely considered to have been coined by a drunken Australian in 2002, was named the Oxford Dictionaries word of the year in 2013 after usage exploded by 17,000% in 12 months.

Making its decision, the Fundéu BBVA noted there are actually two Spanish equivalents (autofoto and autoretrato) for selfie and that both were acceptable ways to avoid resorting to an Anglicism.

But the foundation’s director said “the evidence of the overwhelming use” of selfi meant their previous advice to stick to the term autofoto could be overlooked to reflect the popularity of the term.

Also on the shortlist was amigovio, a blend of the words amigo (friend) and novio (fiancé), used to refer to a serious long-term partner to whom one is not actually officially engaged.

Since 2002, the XYZ Festival of New Words in Le Havre has selected the best, most inventive new French words of the year. Médicalmant blends calmer (to calm down) with médicalement (medically), and denotes “a medicine that is taken to calm down.”

The Society for German Language (GfdS) chose Lichtgrenze, “border of light,” as 2014’s word thanks to the 25th anniversary celebrations in Berlin that saw ten miles of the former East Berlin border lit up with thousands of helium balloons. They were released the evening of November 9th to symbolize the fall of the wall.

In Japan, the Kanji of the Year is chosen through a national ballot, sponsored by the Japanese Kanji Proficiency Society. This year’s choice reflects the fact that in April the Japanese government raised the country’s consumption tax for the first time in 17 years, from 5% to 8%. The rise – designed to bolster funding for the country’s social security needs – had a notable impact on people’s wallets, and led to significant swings in the economy as a whole

According to the 15th annual survey of the English language by Global Language Monitor, the emoji ideograph for heart (and love) was the top word for 2014. The heart/love emoji, emoticon, and variations thereof appear billions of times a day around the world — across languages and cultures. This is the first time an ideograph has captured word-of-the-year honors.

Last to choose its word of the year, the American Dialect Society (ADS) carefully convenes lexicographers and other experts to make its selection – #blacklivesmatter – the Twitter hashtag was certainly fresh and relevant in 2014, as the death of black men — and the lack of indictments against the police who killed them — was he longest running story of 2014 in the U.S.