You Can Lead a Child to Books… 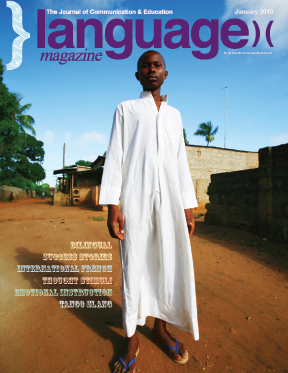 Language and literacy are the tools with which knowledge is built. Without their acquisition, no child has the chance to become an astronaut, a scientist, a doctor, a movie star, or even a musician. Without aspirations, children cannot flourish and life loses some of its magic. Yet, we continue to deny so many of our children the opportunity to develop their own language and literacy skills by refusing them access to books that are suitable for them and might even excite them.
According to a newly released study (see News, p. 10 by the American Association of School Librarians (AASL), in more than 90 percent of school libraries, books in languages other than English account for less than five percent of the collection and, in nearly 60 percent of school libraries, they account for less than one percent. While nearly 14 percent of responding schools reported that at least 25 percent of their students were English Language Learners (ELLs) and a quarter of all respondents rated free-choice reading as the most effective ELL initiative.
Now, I can already hear the English-only brigade proclaiming that all books in school libraries in America should be in English because that’s the language spoken here, but even the most hardened English-only advocate must appreciate that children will never become literate in any language if they don’t enjoy reading. And reading in a second language is hard work at first —imagine being obliged to pick up War and Peace every night for your bedtime read.
Librarians consider “school-wide reading initiatives that encourage free choice reading” to be the most effective teaching strategy for ELLs. Many teachers and experts agree (see Opinion, p.26). Restocking our school and public libraries with books that will interest today’s kids is a relatively low cost policy with no drawbacks and an enormous upside. Not only is it a long term investment which will serve children for many years to come, but, for those who are counting, nearly all the money will end up with American publishers (yes, there are many American publishers of books in languages other than English) so the investment will satisfy stimulus package requirements.
Britain’s Cambridge University recently released the results of a three-year study (see News p.11) into elementary education, which warns “that prescribed pedagogy combined with high stakes testing and the national curriculum amounted to a ‘state theory of learning.’ Prepackaged, government approved lessons are not good for a democracy, nor for children’s education…Pupils do not learn to think for themselves if their teachers are expected to do as they are told.” This completely contradicts the blindly accepted notion that more standards and testing make better schools —the basis for the federal education funding.
Another $250 million was allocated to science, technology, engineering and math (STEM) teaching earlier this month. About the same amount of funding would buy an appropriate library book for every child in public school across the nation. Instead of pinning all its hopes of school reform success on standards, assessment, and incentive schemes, the government, like all wise investors, should spread its bets.

Speaking Frankly
The French Ambassador to the United States, the Honorable Pierre Vimont, talks to Language Magazine about the renewed interest in his language

Stimulus Bill for Thought
We ask leading language experts: “What should be done with the stimulus windfall of $4 billion that is being earmarked for the Race to the Top program?”