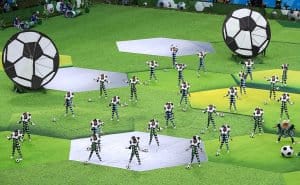 What three words would you use to sum up your country’s World Cup squad? Cambridge University Press (CUP) wants to know as it kicks off a global study into the language of the 2018 FIFA World Cup. To celebrate this year’s World Cup, the Press’ language research team will be conducting a global study that will analyze the language used when discussing each team. Soccer fans around the world can enter the three words they think best describes a team of their choice, on the Cambridge Word Cup website, forming a ‘People’s Corpus’. For every submission, CUP will be donating £1 to UK charity, United Through Sport, a charity dedicated to transforming children’s lives through the power of sport. The charity, which focuses of disadvantaged youth, has locations in Africa, South America, Argentina, the Caribbean and Thailand.

The results of the research, including the top three words for each team, will be revealed ahead of the final match on Sunday 15th July.

“We’ll be building on the research that we conducted during the 2014 World Cup, where we collected a whopping eight million words for the Cambridge Football Corpus. It’s going to be really interesting to see how thoughts and views might have changed in the past four years. Will we, for example, still be talking about Argentina’s ‘flair’, the ‘inexperienced’ English squad, or the ‘focussed’ Germans?” said Laura Grimes, Senior ELT Research Manager at CUP.

While the aims of CUP are sincere, like any public voting on the internet, it can lead to some wonky results. The highest three words for Mexico, for instance, are currently “build a wall,” while for Tunisia the top three words are currently “I said crawl,” followed by “cheating,” “fakes,” and “dirty.” Because users can submit and vote as many times as they like for as many countries as they like, it could lead to individuals voting multiple times for their less than favorable choices. Fortunately, no matter what words are submitted, the result remains that each submission equals more funds for children across the world.

To get involved, simply visit cambridge.org/word-cup, click on any country and enter the three words you feel best describe this team. Once submitted, you’ll be taken to a page that is updated in real time where you can view the reaction so far.