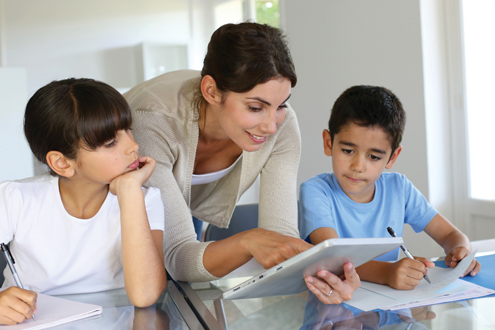 Accelerative Integrated Methodology (AIM) is an intensive second-language-learning system designed to accelerate the development of language proficiency and fluency at the beginning stages of learning. This “post-method methodology” devised by Canadian teacher and author Wendy Maxwell is enabling teachers to consistently and coherently put into practice a combination of often discussed but scarcely implemented language-acquisition techniques fused with original elements in AIM.

Based on a holistic approach, AIM contains explicit strategies to help students experience a rich, supportive, safe, and positive learning environment so that they become confident and competent communicators of information, concepts, and ideas. It involves a highly active, participatory experience where students speak throughout the class and have ample opportunities to be involved socially through flexible grouping with a high emphasis on cooperative learning.

Probably the most original element of AIM is its “gesture approach,” a form of nonverbal communication that promotes memory retention and receptivity to the subject matter involving multisensory input and a variety of symbol systems that facilitate language acquisition. The key among these new aspects is the use of gestures along with the cautiously scaffolded presentation of vocabulary, familiarity, and production, with writing following on the heels of speaking. Although spontaneity of self-expression is encouraged, there is little left to chance in the introduction and use of vocabulary. Indeed, AIM has pioneered the concept of “pared down language” (PDL), which avoids the confusion of introducing new language items from a purely grammatical rationale and instead presents grammaticalized vocabulary to mirror the pattern of native-speaker language acquisition.

All the vocabulary presented in AIM is selected according to frequency and function in the natural process of language acquisition. PDL places a high emphasis on verbs but also includes other vocabulary and structures important for beginning fluency development. Defying the trend of quick succession from one theme to another, AIM delves deeply in a meaningful learning context. Each 50-hour kit is based around a single story — folk stories for the younger learners and social issues for the older.

In addition, teaching the target vocabulary kinesthetically, visually, and in an auditory manner enables teachers to meet a variety of learning styles. Instruction is conducted entirely in the target language. The “target-language only” rule is in place from the first day of instruction. Words are presented through gesture and contextualized through story and drama. Lexical items are reinforced with a hand-signaled gesture which students learn to associate with the word or phrase being taught, even at the grammatical level. These visual and kinesthetic props allow the vocabulary and associated grammar to pass directly to meaning, neatly sidestepping the tendency to mentally translate each word back into the first language. This undermining of the tendency for mental translation rapidly accelerates students’ direct connection to the target language. All the new vocabulary that is learned is associated with an emotional hook that ensures that vocabulary is deeply embedded. In this way, students learn to see and feel the language, preparing them to deal with real-life tasks in the target language.

Even though the ingenious and innovative use of vocabulary gesturing is a central feature of the methodology, it is merely one element in a range of techniques. In many ways, AIM is an adaptation of the “communicative approach.” It revisits certain techniques previously dismissed as “too behavioral,” reframing, for example, teacher-led drilling into “pleasant repetition,” and carefully considers initial rote learning.

At the same time, there is a rich cognitive foundation. AIM draws heavily on brain-based research and deeply on multiple intelligences theory. Where conventional courses are often slanted to overtly logic-based tasks, AIM places great emphasis on music, dance, and drama to engage the full spectrum of student intelligence type and learner style. Also, its extensive and creative use of story, music, and drama provides several opportunities to motivate and engage students while stimulating their imagination and creativity, serving as a model for their own creative use of the language. Using the play as a starting point, and carefully scaffolding through both whole-class and partner/group activities, students engage in the authentic tasks found in every kit in each of the five language areas: listening, reading, spoken production, spoken interaction, and writing.

Initially, when I began researching AIM and reading about the methodologies, I thought it was very radical and I was slightly skeptical about its success in the classroom. From the theoretical point of view, it sounded fascinating, but when I thought about putting it into practice, I wasn’t convinced that it was going to work well. I was afraid my students were going to find the gestures somewhat annoying and ridiculous. As a teacher, you have to feel very confident and secure to try something unusual, especially if you want to engage your students, but I did not feel like that at all. I was also concerned that I would have to invest a lot of time ahead of implementation to learn the gestures in order to be able to do them fluently, and that extra time was out of the equation. However, maybe out of curiosity, something inside of me wanted to give it a try.

When I received the first AIM Spanish kit, ¡Jóvenes en Acción!, Marco el Mago, I really liked it. The play, the activities, and all the songs and raps were extraordinary, fun, and engaging. But I still had my doubts regarding its use. Later on, I had the opportunity to attend the AIM Summer Institute on Vancouver Island, and it was a wonderful, educational, and enlightening experience. From the natural warmth of the Canadian people to the scintillating content of the program, the Institute was a success — all the sessions were very enriching as they were designed to resolve any doubts regarding the use of gestures, lesson planning, assessment, classroom management, the target-language only rule, and more. I had the opportunity to see a vast repertoire of different strategies from each of the presenters, and they answered all my questions by demonstrating step by step how to implement the program in a classroom. The keynote session by John De Mado was also very helpful in helping me realize how AIM blends language-acquisition theory with interactive and engaging practice, and the reasons why it works.

This knowledge gave me comfort. I realized that you don’t need to learn all the gestures before you start teaching. You only need to know the gestures for two or three lessons ahead, so I knew time was not going to be an issue. The only thing missing was using the program in my classroom. My first class using AIM worked well. Novelty can always be an advantage. My students were experiencing something completely new, and they were very engaged in the activities. Of course, some of them were a little bit reluctant to do the gestures and say the words, but they followed the class. The teacher’s attitude towards the development of all the activities is very important in engaging students. Also, consistency is the key to success.

A few classes later, it was amazing to see how easily and quickly students learn the vocabulary when you introduce it using gestures. Now, students who were reluctant at first found the activities interesting. They saw that the new activities worked. Everything made sense to them and they were able to understand all my instructions in the target language (Spanish). It was amazing to see how they could master some communicative functions in just two or three classes instead of the couple of months it would take using a traditional methodology. When they start achieving these little pieces of communication, they get more motivated to keep learning, and they enjoy the learning process more. They don’t need to translate every single word, because they learn the language in a meaningful way that makes sense to them. So far, my students and I are very happy using AIM, and I think effective communication and a degree of fluency can be achieved in a relatively short time.

I’m not alone in my positive experience — other AIM teachers are achieving immersion-like results rapidly within contexts in which students have only a handful of language lessons per week.

Founded by Wendy Maxwell and her husband Matt Maxwell, AIM’s home base is situated on Bowen Island off the British Columbia coast in Canada. While the AIM office is the hub of a wider network of writers, editors, artists, musicians, sound engineers, film crew members, presenters, and practitioners, it is a small operation for an influential educational publisher. Even so, it has become a key player in Canadian French-language education and a major competitor in the field of language education.

AIM is currently used in many Canadian schools and several different countries, and has become something of an international phenomenon. This rapid growth is largely the result of word-of-mouth recommendations by teachers who attend the annual workshops in Canada and beyond and the trainings hosted by school boards and independent schools.
Increasingly, schools with established AIM programs seek to recruit teachers experienced in the methodology. Accordingly, a more sophisticated system of AIM assessment and certification is currently in development, in sequence with a significant online-learning complement to the existing workshops and institutes. The language base is also expanding. There are now complete suites of materials for French for K-12 and beyond and several levels of English, and two kits available for Spanish and Mandarin.

Testimonials from professors, consultants, and teachers suggest that AIM represents a breakthrough in foreign-language instruction. From my limited experience, I can vouch that it is an engaging, exciting, fun, and highly effective way to teach all aspects of language acquisition.

Having recently graduated top of her class at Universidad de Baja de California, Tania Ruiz is a Spanish teacher at Language Magazine’s school.