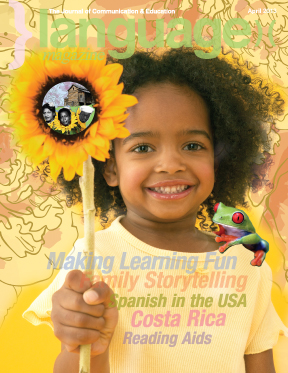 As the Congress finally seems committed to passing a meaningful immigration bill, it makes sense to step back and consider the dynamic of immigration and its effect on language education in this age of communication.

Never before has it been so easy to work and trade internationally. Cheaper transportation, widespread abolition of tariffs, and the giant leap forward in digital communications have globalized the way that most of us in developed nations live, play, and work, leaving poorer sectors of society the only option of moving to “where the work is.” In a way, the digital divide may be a key factor in current migratory patterns, as educated, multilingual workers with access to digital communications in less-developed countries are able to boost their incomes, creating inflationary pressures, while those without access to remote income-earning opportunities find it increasingly difficult to survive on local wages.

Migration in search of a better living — be it for more fertile pastures, hunting, or work — has been part of our history for millennia, but now, as globalization is distorting development patterns, we need to be ever more flexible in our immigration policies to prevent widening of the economic divide.

The majority of Americans support a more equitable approach to immigration. The Public Religion Research Institute, in partnership with the religion, policy, and politics project at Brookings, has just conducted one of the largest surveys ever fielded on immigration policy, immigrants, and religious and cultural changes in the U.S. The survey of nearly 4,500 American adults found that 63% agree that the immigration system should deal with immigrants who are currently living in the U.S. illegally by allowing them a way to become citizens, provided they meet certain requirements, and over half (54%) of Americans believe that the growing number of newcomers from other countries helps strengthen American society.

To help ensure that immigrants strengthen our society and realize their own potential, we need to offer them access to training for the skills they will need to succeed. Lang­uage skills are vital, and the proposed immigration bill has a requirement that immigrants prove basic English proficiency before citizenship. In our March issue, Paul Musselman of Carnegie Speech explained how internet-based training programs could help meet the increased demand for such training. Digital skills and access are presumed for this type of learning and may not always be the case, so these should also be taken into account. However, the current bill makes no provision to fund this training, and it may not be realistic to expect new residents to pay for it themselves, whether or not you think they should. So states and the federal government should consider investing in the skill-building of their future citizens.

All citizens should keep in mind how quickly world developmental patterns are changing due to the acceleration of communication technology, and recognize that language skills may be even more important than they are today in just a few years’ time. Other school districts would do well to follow the example of Baltimore County, where school superintendent Dr. Dallas Dance has unveiled a plan to make sure all high-schoolers graduate with a second language (see page 10). Such forward thinking will help to ensure that this country remains attractive to immigrants and accrues all the benefits that they have to offer, while improving the opportunities for Americans to live and work internationally.

States of Spanish
Julie Barlow and Jean-Benoît Nadeau explain why the U.S. has its own, recognized variety of Spanish

Last Writes Richard Lederer is a Man of Letters