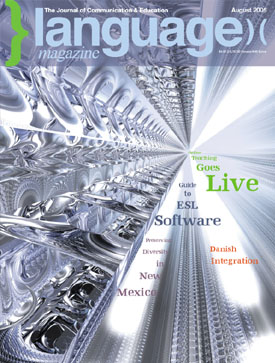 In the news pages of this issue, you will find two stories which initially seem to contradict each other. One is based on a report from the U.K. which finds that Britain is losing out on trade because of its language deficiencies. The other covers a French report on the increasing dominance of English within France’s commercial sector. However, instead of contradicting each other, these stories give an insight into the complexities of language issues in modern society.

In the U.S., as in Europe and most of the world, English is the language not only of business but of opportunity. Asian, African, South American, and European people on the move know that English is a prerequisite to their progress. It provides access to information — the “gold” of our age; a common ground for negotiation and the platform for broadcasting. In the U.S., English literacy is also a key to empowerment.

The dominance of English has also engendered fear that it will gradually replace other languages. As European integration has accelerated over the last fifty years, English has become the continent’s dominant language, despite a series of attempts by non-anglophone countries to limit its hegemony. However, the European experience has shown that English does not replace other languages, instead it supplements them.
Europeans may use English as their lingua franca for business, but they expect to be communicated to in their own language even if they are fluent in English.

America can learn from this experience. We have teach our children to communicate effectively in English so that they will have the opportunities that this affords them, but we also have to encourage the learning of foreign languages and the retention of heritage languages so that we can compete in world markets. The U.S. is not in the same position as the U.K. with regard to its international trading partners, so the necessity for other languages may not be quite so apparent, but success in international markets is nevertheless essential to the economic well-being of the country and is becoming more important by the day. The ability to communicate in more than one language is also an asset for businesses operating only within the U.S. as minority language markets develop.
The economic advantages of multilingualism are enough alone to warrant investing in them. When the cultural, educational, and security benefits are added to the equation, a wise investor would recognize that this is an opportunity we can not afford to miss.

Last Writes
Richard Lederer on his kids the poker players