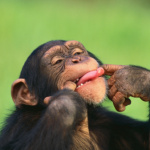 When humans move to a new place, they oftentimes learn the local way of speaking, whether picking up some of the local language or just learning new vocabulary within the same language — think of a Londoner moving to California and calling the trunk of a car the boot or the hood of a car the bonnet. Ever since Saussurrean semiotics, it’s a common theory that words are arbitrary, and that whether you call it an apple, or a manzana or a pomme, these arbitrary words all refer to the same fruit. Humans adapt their language to be understood. However, a new study out in Current Biology suggests that we’re not the only ones. Chimpanzees also adapt their language when they move to a new place.

The study resulted in the first ever evidence of vocal learning in a primate species other than humans. Over three years, the immigrant chimps changed their call for apples to match that of the host chimps. Interestingly, the convergence of the two distinct calls for apples into one coincided with the social integration. In other words, they only began speaking the same language after the two groups of chimps established relationships among each other.

By comparing the acoustic structure of the grunt that the chimps used for apples both before and after their integration, the researchers demonstrated that the referential calls in chimpanzee language are not fixed. For chimps, like for humans, the sign, or the relationship between language and the thing that the language represents, is arbitrary. The researchers noted that the call for apples converged asymmetrically, and that the immigrant chimps modified their call to match the call of the host chimps, and not vice-versa. Furthermore, this process was not immediate; after the first year of living together, the call had not converged. It was only after around three years of building social bonds that the immigrant chimps learned the local language.

The full study, “Vocal Learning in the Functionally Referential Food Grunts of Chimpanzees” is available here.