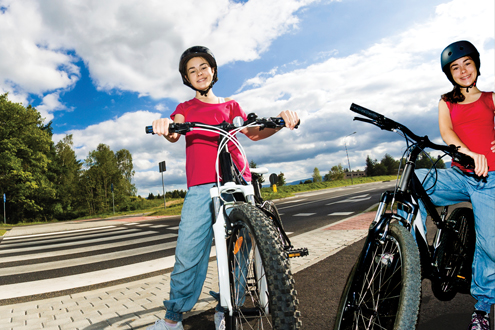 The adoption of the Common Core Standards (CCSS) by many states has brought the issue of complex texts to the forefront. The questions for teachers, administrators, and teacher educators have become “How does one revise the curriculum so that complex texts are included as a part of everyday school life?” and “How does one teach students to interact with complex texts, particularly those who are struggling readers?” These questions are intensified for English learners (ELs), who now make up 21% or more of the public school population, depending on the region or school district (http://nces.ed.gov/fastfacts/display.asp?id=96).

For many years, educators have been concerned about the slow progress many English learners have made in their academic careers. While most EL students were able to communicate socially within a few years of attending American schools, many were not able to keep up with their English-speaking companions when it came to more academically complex material.

A look at the teaching practices and materials used with EL students may help to explain the reasons for the lengthiness of many ELs’ trajectory in the development of more academic registers of language. Valdés, (2000) has documented the segregation of EL students from English-speaking peers and an age-appropriate curriculum. Menken & Kleyn (2010) in their study of “long-term ELs” found that in addition to segregation, most ELs had not participated in a coherent English-language development program that took students from beginning stages of language learning through to more complex uses of English in both oral and written forms. Furthermore, many ELs’ frequent moves from one school to another added to a lack of consistency and coherence in the programs they attended.

A simplification of second-language learning processes has also characterized many ESL or ELD programs. The innatist assertion that, so long as EL students understood the content, second-language acquisition would take place has contributed to a simplification of the curriculum for ELs. The common practice has been to “shelter” the curricula for ELs by simplifying complex texts, introducing difficult vocabulary prior to reading the text, and “frontloading” any and all information that students might need for comprehension. This has resulted in removing any complexity in language and in concepts. ELs, therefore, have had little to no interaction with the array of complexity in texts and thought required by the English language curricula.

The adoption of the CCSS by 45 states and the District of Columbia has intensified the concern for ELs. The CCSS requires that all students “be able to comprehend texts of steadily increasing complexity as they progress through school” (CCSS, Appendix A, p.1).

What is text complexity? And how can EL students be assisted in comprehending and using complex texts?
In order to better understand text complexity and the experiences that ELs have or have not had with complex texts, it is helpful to examine two school-based examples. Consider the following two excerpts about Abraham Lincoln’s childhood, paying close attention to the grammatical structures utilized. 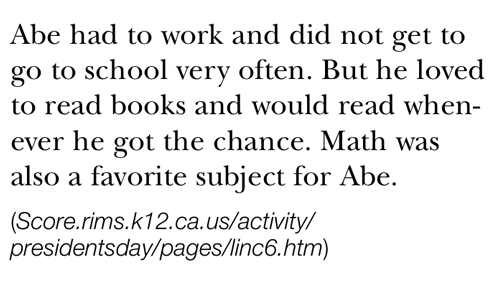 In this first example, we can see two compound sentences joined by the conjunction “and.” All three sentences are in the simple past tense, and the only more “complex” tense is the “would read” in the conditional past. More importantly, we do not gain very much information about “Abe,” and what is there is not very interesting. This is the kind of simplified text that EL students are subjected to all too often.

A second, more complex, text on the same subject gives the reader a more interesting and nuanced view of Abraham Lincoln: 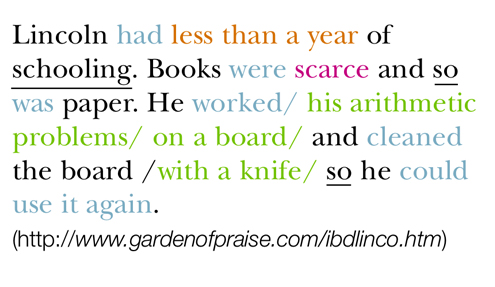 In this second excerpt, we find more text complexity. As in the previous example, there are three sentences. However, the third sentence consists of two clauses, with each clause containing several phrases that provide us with additional information (lexical density). In the first sentences, the adjective phrase “less than a year” provides us with information about the length of Lincoln’s education, and thus adds to the sense of time in this “past tense” paragraph. The scarcity of books and paper are foregrounded so that we can understand why he used a board for his arithmetic problems. Rather than stating that Lincoln liked math, this text tells us how he performed math problems by using a board — a wooden board, we assume, because it had to be cleaned with a knife. Vocabulary words such as “scarce,” “schooling,” and “arithmetic problems” are much more specific in meaning. And we find two different uses of “so.” In the first usage, “so” functions as an additional adverb that adds the scarcity of paper to that of books. In the second usage, “so” functions as a linking adverbial of result or inference that signals that the second unit, “he could use it again,” is the result of the former, “cleaned the board.” Thus, “so” changes its meaning because its function has changed.

A careful look at a complex text can assist in understanding some of the ways in which these texts are structured. This paragraph is taken from Alvarez (2012). 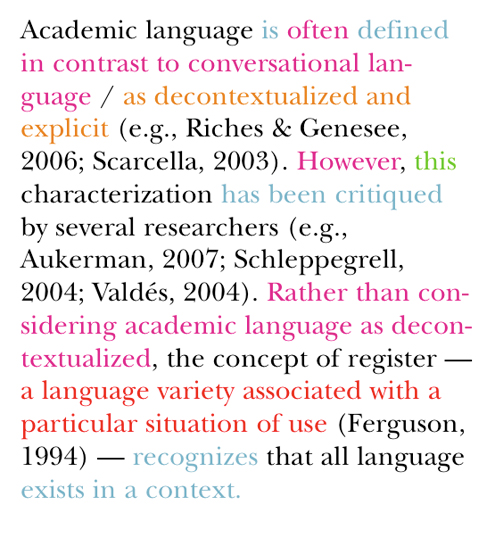 The head noun, “Academic language,” as occurs so often in complex texts, is an abstract agent. The passive voice “is defined” is one way that the author achieves a detached stance, giving the impression of authority. “Characterization” is a nominalized form of characterize, which adds to the authority of the author. Moreover, one can find embedded adverbials such as “in contrast to conversational language” that serve to provide additional information about the head noun. Furthermore, the use of relative clauses such as “a language variety associated with a particular situation of use” further defines the noun in question.

Some districts have already seized the initiative — Lily Wong Fillmore, working with Maryann Cucchiara and the New York City schools, developed a multi-layered process called “Sentence Talk: Grappling with language and meaning in complex texts” (Sentence Talk) — recognizes the need for EL students to work with complex texts with the assistance of their teachers within the framework of thematic units. Teachers learned to deconstruct complex texts by paying close attention to the grammatical and rhetorical structures involved and then assisted EL students to pay attention to the way these texts are constructed, thus developing “habits of mind” in both teachers and students.

In collaboration with the Council of the Great City Schools, the Albuquerque Public Schools has adopted “Sentence Talk,” and there are now six resource teachers from APS Language and Cultural Equity working with 13 lab schools learning how to use this approach with EL and bilingual students. Their work is in progress, and their insights into the use of “Sentence Talk” with students and teachers will be the subject of future articles.