Ya Talkin’ About Me? 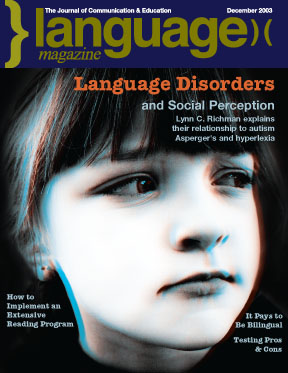 The way we speak is important — our dialects and accents reveal cultural and historical information about us and our heritage in an almost subliminal way. No­where is this more evident than in the United States, where waves of immigrants from all over the world in combination with internal demographic shifts have produced varieties of American English that reflect the country’s cultural mosaic. Over the past four years, distinguished contributors to Language Magazine have worked to document this information through regular articles highlighting the rich diversity of North American speech. These articles have generated great interest — not only within linguistic circles but among the general public — demonstrating the fascination that we all have about the way that we and those around us speak.

The series has also spawned related projects — the articles are being compiled into a book, Voices of American English, which is due for publication next year by Blackwell Publishing. The producers of the McNeill-Lehrer Newshour are working with Dr. Wolfram and other linguists to produce a two-hour television documentary entitled Do You Speak American? to be broadcast at a primetime slot on PBS in 2004. The documentary will be supported by a DVD and a web site where articles from Language Magazine will appear.

The obvious public interest in American dialects and other linguistic issues should be an encouragement to all those who are involved in language teaching and education who realize the importance of language to society on many different levels. Although this significance rarely receives proportionate media coverage unless it is linked to a controversial issue such as immigration or minority rights, it is obvious that language is the prerequisite for communication — and we are supposed to be in the age of global communication — yet far more airtime is devoted to the technology transporting the words than to the delivery of the words themselves. Maybe this imbalance will now start to be corrected.

Dr. Wolfram has worked tirelessly to secure the contributions of experts to cover regional dialects and also to ensure that the series covered the major variations of American English. I, on behalf of the readers of Language Magazine, would like to take this opportunity to thank him and all of our marvelous contributors for their hard work.

Everyone at Language Magazine would like to wish our readers Happy and Peaceful Holidays whatever your faith, whatever your language, and however you speak it.

Testing: ‘Two Teachers and Their Tests’
Lori Langer de Ramirez recounts her own experiences of testing

Reading: Extending the Gift of Reading
Rob Waring explains how to set up an Extensive Reading program

Bilingual Education: It Pays to Be Bilingual
Workplace rewards for multilingualism