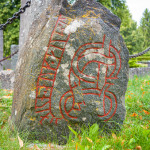 All of the Nordic languages; Icelandic, Faroese, Swedish, Danish and Norwegian are descended from Old Norse, the language of the Vikings. These languages have all evolved in different ways over the past 1000 years, so they are very different from each other. Deep in central Sweden, there is another, lesser known Nordic language that is at risk of going extinct. This very rare Nordic language, known as Elfdalian, was previously regarded as a dialect, but leading linguists now agree it is a separate language.”Often Norwegians, Danes and Swedes can understand each others’ languages and dialects. But Elfdalian can’t be understood by any Scandinavians apart from the ones that grow up with it, and that is why we consider it a separate language,” Yair Sapir, a linguistics expert who lives in Copenhagen and teaches at Lund University in Sweden told The Local.

Elfdalian is a real language currently used by around 2500 people, but after figures emerged that only 60 children currently speak the language, Älvdalan, the town where it is spoken, planned to start teaching it in one preschool from September of 2015. Students will begin learning at age 6 and keep it as part of their curriculum until age 18. “It’s a highly threatened language and so it is great that the municipality is going to experiment with teaching it to children in preschool,” said Sapir. “In the past, children from this area didn’t go far beyond the farms they lived on but now they go to school and consume so much other media that it is hard for them to keep Elfdalian as their main language.” The name “Elfdalian” is a romanized pronunciation of “Älvdalian,” which in Swedish means ,”river-valley.”

The recent wedding of Sweden’s Prince Carl Philip has also sparked hope amongst linguists for the once-banned Elfdalian language. The new Princess of Sweden, Sofia Hellqvist, former glamor model and reality TV star, is originally from Älvdalan. “Sofia’s grandmother speaks Elfdalian, I think her mother does, too, and I guess Sofia understands it,” said Lena Egardt a local violin teacher in Älvdalen. “The couple have visited Älvdalen many times, but people here leave them alone.” Linguists hope that Princess Sofia’s connections to the language and culture of Älvdalen will help raise awareness for the endangered language and promote funding for further research.

Through studying Elfdalian, experts have increased their understanding of the Viking language Old Norse, with which it shares some words, features and expressions. “Elfdalian is a goldmine. It works almost like a linguistic deep freeze, where one can get a glimpse of Old Norse traits that have long since vanished in the other Nordic languages,” language historian Bjarne Simmelkjær Sandsgaard Hansen, co-organizer of a the Copenhagen University conference told Danish newspaper Politiken. “It has preserved many old features, which we may not even know existed if we didn’t have Elfdalian,” he added.