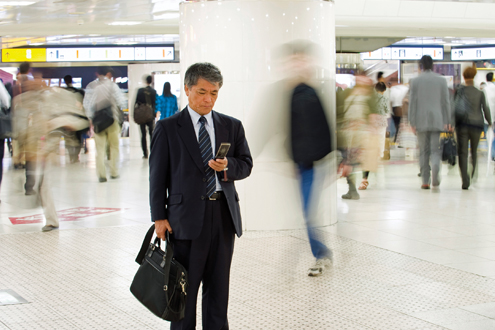 M. Catherine OliverSmith describes how expert execution of a simple idea has resulted in an international educational phenomenon

Last month, a brand new company that teaches English around the world using mobile phones, Urban Planet Mobile, won the coveted GSMA Global Mobile Award for Innovation in Mobile Learning. Other companies shortlisted for this prestigious prize included Nokia and Pearson Learning, Ericsson and Columbia University, the BBC and the British Council for their initiative in Bangladesh, and OnPoint Digital for its CellCast delivery system.

The award-winning idea is a simple, daily, audio-only lesson created to reach as many people as possible for a manageable sum of money.

Within three months of launching the service in Indonesia with PT Telkomsel, the largest mobile carrier in the country, approximately 105,000 people subscribed to Urban English. These results attest to the huge hunger for English but also to the efficacy of the Urban English program and its design.

Urban Planet Mobile was founded in 2007 to meet the incredible demand for English. Throughout the world, English is a game-changing tool — it is the tool most likely to raise a person’s standard of living and open doors of opportunity.

In the world of audio, after music, language learning is the biggest market in the world with English making up about 75 percent of the market, or 1.4 billion people. But, while English learning is a huge market, it is pretty well served, so new products have to be innovative and original to get off the ground.

The number one use of mobile phones around the world is to check the time. Texting comes in a very close second. But regardless of the phone, whether it can download music, play games, or actually call a person, every last one, even the ones that you have to hand crank to get a charge, all of them are first and foremost “audio” devices.

What better way to help people struggling with listening comprehension and oral communication than to provide them with the opportunity to hear a daily audio English lesson on their mobile phone?

The desire to learn English and the availability of English teachers and programs are unevenly yoked. Many people who want to learn English are left without options. Rural areas, impoverished populations, unstable countries; all would benefit from increased English proficiency but, sadly, simply aren’t afforded the chance. Teachers either won’t go, can’t go, or there simply are not enough to meet the need.

While there are great programs available for the self-study market, these are, again, either priced beyond the means of a large percentage of people, not available with an audio component due to pirating of the intellectual property, or simply not within a person’s reach.

Online would seem to be a great option except that mobile phones hold a 4:1 ratio to desk and laptops and internet access is limited, controlled, or spotty. The developing world simply has bypassed the wired world to go wireless and mobile. To reach them, mobile is the right tool.

While other organizations simply took their well developed, comprehensive programs and worked to make them available on web and mobile, Urban Planet chose to develop and design the lessons from the ground up for mobile consumption. Just as reading the newspaper over the radio isn’t particularly inspiring, taking tomes of information with many components, hours-long lessons, and that which is normally accompanied by pictures and print and forcing it onto mobile handsets as an audio-only program simply doesn’t accomplish the educational goal.

People on mobile phones are not sitting quietly at a desk with pen and paper ready to take notes or listen non-stop for an hour or more and repeat phrase after phrase of material. The mobile phone is just that — mobile, and the people on it are going about their incredibly busy lives. The material they access on their mobile needs to work for them and fit into their lives.

Additionally, while in the U.S. it seems that just about every other person has a web enabled smart phone, this simply does not hold true elsewhere. The key to providing the opportunity to learn English to the largest potential percentage of the population seeking it was to keep the program simple. Therefore, Urban English was developed to be delivered as an audio lesson compressed and sent via text — just like a ringtone. 95 percent of handsets worldwide can receive a basic text and ringtone. With the ability to also offer a call-in feature to access the lessons, the program became available to virtually anyone.

The design is based on well established curriculum building guides. Students get short lessons because too much information presented all at once doesn’t give the student the opportunity to concentrate and absorb the concepts. Additionally, too much information is almost impossible to follow when on a mobile phone.

The lessons are building blocks with each lesson using something learned before while adding a new dimension such as taking a word and using it in a simple sentence and then incorporating that sentence into a short conversation.

Questions are posed before the lessons and repeated after and then the answer is offered. This is done to give the individual a reason or a goal for listening and, even though the answer is provided and there is no actual test, simply giving a focused reason for listening encourages active listening.

All of this is incorporated in the daily delivery of a one- to three-minute lesson. These lessons are specially engineered through a patent pending process developed by Urban Planet Mobile to be the file size of a 30-second music ringtone.

The lessons are also automatically sent. The application doesn’t require someone in Indonesia to download it and then remember to activate it each day. It’s a subscription to the lessons and each day a text is sent to the mobile phone, carrying that day’s lesson. The texts can be saved, allowing the individual to access the lesson multiple times or even saved to the phone in many cases.

Importantly, the service is priced for each market, with the help of local partners to determine what users can afford and how often to bill. In many locations, people pay each day for the lessons, loading money to their phone account on a daily or twice daily basis.

It is hard for us, as Americans, to understand the developing world, but the Urban English lines are going to areas where nickels and dimes are precious and few but where people are willing to commit what little they might have to pursuing learning English, knowing that through English acquisition they can immeasurably improve their lives and the lives of their families.

It took time to develop the Urban English program. After setting up offices and hiring a barebones staff for the Savannah, Georgia office, the first step was creating a plan for the curriculum. ESL professionals were brought in to help layout and define the guidelines for building the lessons as well as other linguists and teachers to create the lessons.

Voice talent had to be located (and of course a recording studio built and sound engineers and designers hired). For the 12 languages currently targeted as markets for Urban English, all but Bangla were local Savannah talent. Russian, Thai, Hindi, Spanish, Arabic, Korean, Japanese, Mandarin, Bahasa Indonesian, Portuguese, and Vietnamese speakers were found in the local community. Now that the company has relocated to Durham, North Carolina, they’ve recorded in Haitian Creole and found a native Bangla speaker, as well.

While the lessons themselves are in English only because the brain is essentially a lazy muscle and when provided with direct translation, likely to only pay attention to every other word or so, it leaps into action when fully focused, which happens with immersion style learning. However, each lesson is introduced in the individual’s native language to let them know the category, whether business or social, the topic, whether banking or shopping with friends, and the lesson format, whether word, phrase, or conversation.

Thus, after much work, done mostly by the sound designers who recorded and pieced together each separate component, including music and an echo effect, sometimes (often) in languages they didn’t speak, over two years of lessons in both business and social categories with 15 or so topics within each were completed.

At the same time, groups of students in several countries began to test the product and provide feedback on the programs. What grew out of these test markets was that there was a need, not only for the more intermediate programs Urban Planet Mobile already had in place, but a desperate need for very basic, introductory English. The intermediate lessons were the original plan and created to serve the population needing to improve listening comprehension of English and develop more relevant vocabulary to real life. The expectation was that the individual subscriber would have familiarity with English through other programs and school. A basic introductory course line was something that had not been thought of as suitable for an audio only, mobile delivered program.
However, an entire year’s worth of basic lessons was soon created. The basic lessons do provide direct translation and incorporate repetitions, the sentences being spoken slowly as well as at a normal rate of speech, and again with music and the echo effect.

As the launch of the programs became imminent, people also began asking for vocabulary development programs specifically for the TOEFL exam, so that too went into the product development pipeline, along with SAT Remix, a program developed for the U.S. market.

Just four years after the Urban Planet Mobile concept was first tossed around, the idea of a simple program of audio lessons to aide intermediate learners with listening comprehension through access daily to a native English speaker on the mobile phone had morphed into a full grown, international, mobile education company.
While the programs are audio only for the most basic phones, an entire animation library has been created to accompany the audio for distribution on more advanced, web-enabled phones for the technologically mature markets such as Japan and South Korea. These visual lessons will also to be in place for when the rest of the world catches up, whether in months or in years. Additionally the programs are adaptable for tablets, as that market grows.

The plan is to expand the company to offer robust educational programs that include interactivity, tests, evaluations, and, when appropriate, certification.

The goal of Urban Planet Mobile, simply put, is to put the mobile to its best and highest use, bringing change to the world and improving lives — a billion at a time.