Literacy for All is the Real Goal 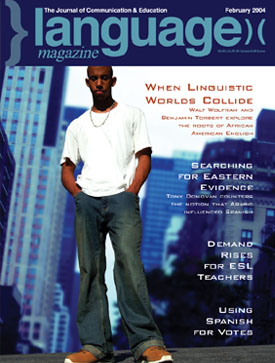 The whole argument against bilingual education is based on the premise that it is not the best way to learn English. Now, a comprehensive research report (see “Bilingual Approaches Best for ELL Reading Achievement”, p.11) has confounded that theory, proving what many educators have been arguing for years — that English language learners have a better chance of becoming literate in English through bilingual education than they do through English-only programs.

This report is based on the analysis of over thirty years’ research, using only objective comparisons which could scientifically be judged as “like-for-like.” With evidence like this, one would hope that legislators would reconsider their positions on bilingual education and start looking for ways to support such programs. However, clear evidence does not seem to hold much weight in some circles.

Campaigners against bilingual education in California cleverly dubbed Proposition 227 the “English for the Children” bill, thereby suggesting that their opponents sought to deny children the benefit of English. This public relations coup inspired not only the media to adopt their cause, but voters to believe that supporting the bill was the only way to guarantee that their children would get the education they would need to succeed. Unfortunately, the pro-bilingual education camp was unable to stem the diffusion of this misconception. Once it was repeated a few times on television, radio and in conversation, the myth became a reality for the majority of the electorate, even though it was never supported by the evidence. And it soon spread, as myths do. Then, evidence in the form of dubious test score comparisons was concocted to support the theory, so it spread further. But literacy rates are not improving.

What we are left with is a situation where, on the surface, it seems that everybody has the same objective — improving the literacy levels of all students, but there are two different views of how to achieve it. If this were truly the case, then we could expect both opponents and proponents of bilingual education to welcome the findings of this report and use it as a basis to work together to achieve their mutual objective. However, opposition to bilingual education has become so entrenched that no amount of evidence in its favor is likely to sway opponents.
Educators are left with no option but to educate those around them, to take every opportunity to present a research-based opinion, and to debate their position with those less well informed. It is as much a teacher’s duty to inform society of the best practices in education as it is a doctor’s duty to encourage healthy living.

If legislators really do care about the education of the next generation of Americans as they so often claim, eventually they will have to listen.

Putting Extensive Reading to Work
Julian Bamford and Richard R. Day asked teachers from
all over the world how they put extensive reading to work in the classroom