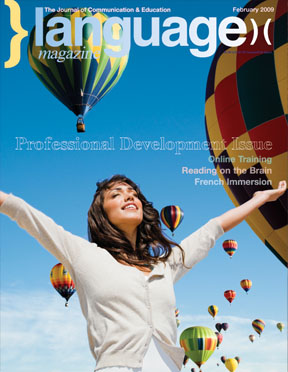 Every January, Education Week publishes its annual review of the U.S. educational system and this year, for the first time, the report focuses on English language learners (ELLs) while examining states’ efforts to improve the opportunities for students to succeed throughout their lives.
Quality Counts 2009: Portrait of a Population — How English-Language Learners Are Putting Schools to the Test also highlights the efforts by state and local leaders to address the needs of this diverse and rapidly growing group, which increased from 3.2 million in the 1995-96 school year to 5.1 million in 2005-06, or a jump of 57 percent in that period. Twenty states have seen their ELL enrollments at least double in this time. While the report finds that nationally one-quarter of ELLs failed to make progress toward English-language proficiency, results vary widely between states. Connecticut reported that only 1.4 percent of its English-learners failed to make progress, while Maine counted 44.9 percent of its ELLs in this category.
The report indicates that a lot of progress has been made in recent years to understand who ELLs are and how they perform in school but it is clear that many of these students are struggling, as states face the daunting challenge of finding the combination of teacher preparation, instructional support, and assessment that works best.
Here in California, the Superintendent for Public Education, Jack O’Connell, has made closing the achievement gap the centerpiece of his agenda but, like most states, the achievement gap between ELLs and public school students is tragically large, according to state and national benchmarks. On the national level, the gap was 24.8 points in reading, with only 5.6 percent of 4th and 8th grade ELLs scoring “proficient” or better compared with a national average of 30.4 percent, according to the National Assessment of Educational Progress.
Probably the most striking aspect of the report is the disparity between states’ per pupil spending and the correlation of low per pupil spending to areas with high immigrant (thus, high ELL) populations. Per pupil expenditure in California, Texas, Nevada, and Arizona is 25 percent lower than the national average.
These findings lend even more weight to the argument that we need to spend more on the education of our least privileged if we are to avert the impending crisis that the creation of an under-educated population would entail both economically and socially.
In the light of such information, why is it that President Obama’s bailout/stimulus package and its $140 billion earmark for education are generating so much opposition? Former President Bush’s $750 billion bailout package for banks and commerce received a wave of bipartisan support, yet every single Republican representative (and several Democrats) voted against Obama’s plan.
Maybe our representatives in Washington believe that Wall Street bankers and Detroit moguls are more deserving recipients of tax dollars than those elected to maintain and develop our state services.