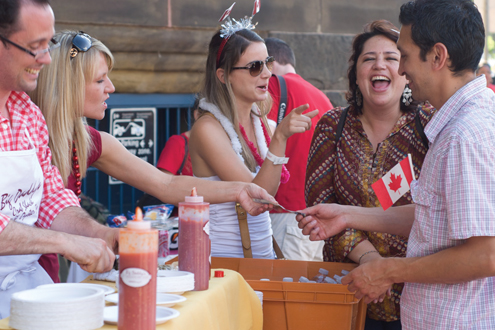 Quebec is the only one of Canada’s ten provinces in which a majority of the population speaks French. The French language came to modern-day Quebec with France’s settlements in the New World and quickly took hold as a common tongue. After the French Revolution, Parisian French became standardized in France while Canadian French continued to evolve on its own. Centuries of political battles later, the French language gained legal recognition alongside English and eventually became the official language of Quebec in 1974 through the Charter of the French Language, which is also known as Bill 101.

A History of French in Quebec
Quebecers have fought and still fight to keep the French language alive. However, Bill 101 remains controversial and has been amended more than six times since 1977. The charter’s preamble explains the resolve “to make French the language of government and the law, as well as the normal and everyday language of work, instruction, communication, commerce, and business.” It also specifics that the National Assembly is to follow this plan “in a spirit of fairness and open-mindedness” and recognize “the right of the Amerinds and the Inuit of Quebec, the first inhabitants of this land, to preserve and develop their original language and culture.” The controversy comes from the province’s large anglophone minority and certain specifications that ban English-language education and even signage on roads and in restaurants.

Due to the divergence from standardized Parisian French, the language in Quebec has a variety of different vocabulary words and an alternate accent. Cultural and historical differences mean a discrepancy of associations. For example, many curse words in Quebec are associated with Catholicism as a result of frustrating Catholic social control in the 19th century. Although the influence of the Roman Catholic Church dwindled after Quebec’s Quiet Revolution, words like “tabernacle” remain profane.

While these cultural differences were influential enough to shape the province’s language into Quebecois, they also provide a compelling reason to study French in Canada. French speakers in Quebec are likely to help those who are lacking in language skills. Approximately 80% of Quebecers’ native language is French, but almost 50% reported themselves as bilingual in French and English. With the majority of Canada speaking English and English still holding relatively more social and economic clout in Quebec, natives are often happy when foreigners speak French rather than taking the easy English road.

Historical and Cultural Sites
Quebec City is the only fortified city north of Mexico and has a unique military history. La Citadelle, the star-shaped fortress located at the city’s highest point, showcases this. The Citadel is a National Historic Site of Canada and part of Old Quebec, which is a UNESCO World Heritage Site as of 1985. From there, Battlefields Park is the green center of Quebec City’s fortified walls. As the name suggests, the 103 hectares of meadows and knolls, including the Plains of Abraham, have a bloody history as the site of many battles for rule between French and British armies. About ten public hangings also took place here between 1763 and 1810. Today, residents take picturesque strolls overlooking the St. Lawrence River in the warmer months and cross-country ski through the park in winter. Another historically significant locale is the Parliament Building, which was inspired architecturally by the Louvre in Paris, and a third is the National Assembly Chamber nearby.

The Musée national des beaux-arts du Quebec is also at Battlefields Park, with views over the St. Lawrence and the neighboring Plains of Abraham. The museum is home to Canadian and Inuit art and is set to open a new garden pavilion, which will tie the newly expanded buildings together with a harmonious glass installation, this year. For more art, the Rue de Trésor, or Treasure Street, holds the works of many artists in an open gallery. The area is so named because it was once used by colonists to reach the Royal Treasury and pay their yearly taxes. In the 1960s, two artists transformed it into a place to sell their work directly to passersby.

City Basics
About half of the province’s residents live in the greater Montreal area, meaning most of the must-see attractions are located in or around the capital, Quebec City. Quebec’s equivalent to France’s Eiffel Tower is “the world’s most photographed hotel,” the Fairmont Le Château Frontenac. The castle-like structure is also just next to the St. Lawrence River, which visitors can ferry down for cheap transport. Those prone to sea-sickness or who don’t want to climb the many stairs and steep streets of the city can ride the Funiculaire du Vieux-Quebec, or the Funicular, which cables from Le Château to the Rue du Petit-Champlain.

Montreal and Quebec City also have their own cuisine scenes. Quebec staples are traditionally rich and meat-heavy, combined with light, French-style cooking. Quebec City has a commitment to using Quebec-made ingredients and holds a waterfront farmers’ market featuring homemade maple syrup, iced apple cider, cheeses, crab, and foie gras. There is even a gourmet food train that travels from the city’s outskirts to the Charlevoix. Called Le Massif de Charlevoix, the train was created by Cirque de Soleil co-founder Daniel Gauthier.

Summer Specifics
Canada Day is on July 1, but for Quebecers who have strong nationalist ties to their unique province those celebrations are quiet compared to those of St. Jean Baptiste Day, or la Fête nationale, which is held a week earlier on June 24. For the minority of Quebecers who still believe that the province should be its own country, this outdoor festival is an occasion to wear Quebec blue rather than Canadian red. The annual Festival d’ete de Quebec, which will be held from July 5–15 in 2015, fills the streets with entertainment and the city’s unique music culture. The festival lasts for eleven days, with hundreds of performers spread throughout the downtown area and a total attendance of about 1.5 million. Another summer activity is jogging the three-mile loop around Old Upper Town. The stairs leading to the upper wall are snowed in during winter, making this a summer exclusive.

A Welcoming Winter
Canadian winters are notoriously cold, but those experienced with the snow know how to get everything out of it that they can. Les Glissades de la Terrasse is a 270-foot-high ice slide built at Le Château Frontenac every winter. Gravel pits at the bottom act as a brake for wooden sleds and toboggans. From early January to late March, the Hotel de Glace (Ice Hotel) is rebuilt each year about ten minutes’ drive from downtown. There are regular daily tours, an ice slide, and a cider bar where drinks are served in tumblers carved from ice. To top it off, Carnaval de Quebec is the province’s winter festival, which runs from late January to mid-February. Temperatures can get to below minus 20 degrees, but if students dress appropriately, they can slide down the snow-covered Plains of Abraham in inflatable tubes and rafts or try a hand at other winter activities such as snowshoeing, ice-fishing, or dog sledding.

University Travel (VU) in Montreal
VU organizes language programs for adults in France, Canada, Monte Carlo, and Martinique (French West Indies in the Caribbean), but also for teenagers in Montreal, Quebec, Paris, and Monaco (Monte Carlo). The courses offer a language-learning experience with elements of local culture, be it from France or from Quebec. With many options for learning French, VU stands out for its small, intimate class sizes. The atmosphere is studious and friendly. VU offers homestay accommodations to make the immersion experience all day and all night. Schools are accredited by European or Canadian governments.

Business–French Summer School at HEC Montréal
This unique four-week intensive program (July 20 – Aug. 14, 2015) addresses the needs of all non-francophone students and is also geared toward anyone who wants to hone their French-language skills used in the workplace. This French-immersion program revolves around an intensive credited business-French course (levels: beginner to advanced), interactive oral-communication workshops, and conferences in marketing and management. No prior specific knowledge of business is required. Participants will also take part in activities that will allow them to discover Montreal and some of its most prominent businesses: Hydro-Québec, the Canadian Broadcasting Corporation (CBC), La Cité du cinéma, Moment Factory multimedia studios, and Cirque Éloize, to name a few. The program also offers many sociocultural and sporting activities. This summer, come to Montreal, the second-largest French-speaking city in the world after Paris.

CLC Montreal
Speak French: learn, live, and thrive in Montreal. If students dream of speaking French, CLC will help make it come true. Located on a café-rich avenue — in the Paris of North America — CLC is the boutique language school where students can learn to speak French fluently. It’s not about memorizing vocabulary and focusing on grammar rules, but confidence-building, and fostering real-world communicative ability. CLC has an intimately humanistic approach that makes learners feel totally at ease and open to learning. With a steady stream of tailored, constructive feedback, each student is nurtured and progresses faster than they ever imagined. Their thoughts will flow in French like water from their lips — connecting mind to mind and heart to heart. Students mmerse in a French-language experience to hear the whispers of their dreams, inhale an intoxicating culture, and discover a hidden part themselves at CLC and on the romantic streets of Montreal.

Ekocamp
At a French-immersion camp such as Ekocamp International, children gain much more than some traveling experience. At Ekocamp, kids have the opportunity to make friends from different countries, to learn and practice French, and to discover new activities as well as different Canadian cities. Most of all, the program makes sure that young campers gain life experience. This small, family-style camp can accommodate a maximum of 150 campers at a time. The professional staff is well trained in looking after children and treating them with kindness. Surrounded by a forest and lake in the beautiful Laurentian region, the campsite offers the campers the chance to partake in different water activities as well as horseback riding and rock climbing. In addition to fun and safe activities, Ekocamp organizes optional French language classes every week.

Programme Explore
Explore is a five-week intensive French-immersion program offered during spring and summer for people with any skill level in French. Students have the chance to discover a French-speaking Canadian region while learning in classes adapted to their language levels. Through classroom instruction, workshops, sociocultural activities, and field trips, students will not only improve their language skills but also discover the Quebec culture. While exploring, they will also meet new people from all across the country and have opportunities to exchange ideas in a stimulating environment. Explore is designed for Canadian students, but Americans can also apply as nonbursary students.