Leaving Your Wallet Behind 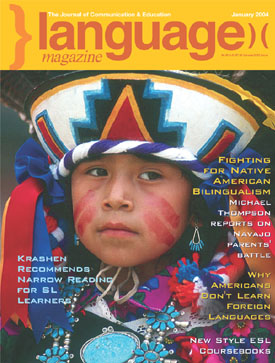 This month sees the second anniversary of President Bush’s flagship education initiative, No Child Left Behind, which promised the resources and expertise to ensure that every American child would receive the education required to progress in life. Teachers of English as a Second Language and bilingual educators welcomed the plan as it appeared to recognize that their students needed special attention.

The administration will no doubt take the opportunity to congratulate itself on how successful the program has been, however it is being met with mounting criticism both from educators and the general public. The most common criticism is that schools are not receiving the funds required to meet more stringent testing requirements. The government’s own figures lend weight to this argument – the funding authorization level for fiscal year 2003 in the Act was set at $29.26 billion, yet the White House proposed a budget of only $22.1 billion for the same period and Congress approved $23.83 billion. Of that figure over $7 billion remains unallocated as states are unable to meet the disbursement criteria. The President’s 2004 budget proposal would underfund the act by $9 billion, leaving local communities — many of which are already facing severe budget gaps — to make up the difference.

Some school district superintendents have even come to the conclusion that they are better off opting out of federal funding, as provisions in the Act would result in costs up to three times the funding.

Nobody disagrees with the principles behind No Child Left Behind, but the idea that federal government can take control of education through a standard policy suitable for all local schools is very worrying. The Act is based upon formulaic tests, upon which progress is judged and failure in these tests is punished. According to the new tests, 26,000 of the 93,000 schools in the U.S. failed to make adequate progress in 2003, so many of them will not be receiving the funding they need to improve in the future.

Perhaps, the most revealing indicator of the Act’s success was the result of a recent survey which found that 75 percent of principals believe that the law relies too much on testing. Most also say the law’s sanctions are unfair. Once again, educators are being ignored when it comes to the creation and implementation of educational policy.
Democratic presidential hopeful, Howard Dean, has made his position clear on the act, saying, “Parents, teachers, and school boards need resources and support, not Draconian measures that set them up for failure.” Let’s hope that he stands by his words should he be elected.

PS. As we are now in 2004, the first of the two official “Years of Foreign Language Study,” according to Senate Resolution 170, which has been referred to the Committee on the Judiciary, Language Magazine will be contacting legislators across the nation to find out how they plan to support the initiative and what languages they will be learning. Look out for the first update in our next issue!

Why Won’t Americans Learn Other Languages?
Margaret Orchowski denounces five myths that may inhibit us

Study in the USA

InterviewDialects
Maciej Baranowski does the Charleston