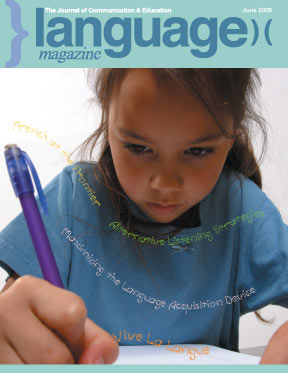 U.S. Senators Lieberman and Alexander have set a shining example of how to promote international trade and cooperation through the introduction of the United States-China Cultural Engagement Act (see News, page 10).
The legislation authorizes $1.3 billion in federal funds over five years to provide for Chinese language instruction in American schools, increase American consular activity supporting American commercial activity in China and provide for physical and virtual exchanges between
the two nations.

The way in which the U.S. responds to the emergence of China as an economic, political and military superpower will have a profound effect on the nature of our world over the next century. If we are to avoid a repetition of last century’s Cold War standoff, or an even more dangerous confrontation, we need to foster engagement and understanding between our two countries.

This bill is a step in the right direction. There are now over 250 million Chinese students of English, and, as we reported in our April issue (The Sleeping Dragon Awakes, pages 22-25), English language teaching in China has progressed at an astonishing rate over the last decade, while there are only around 35,000 Americans enrolled on Chinese programs at university level. Over 60,000 Chinese students study in the U.S. every year, while less than 3,000 Americans go to study in China. Of course, English is the global language and there many factors to take into account when comparing the number of international students in the two countries. However, it is clear that more effort must be made in America to get to know China and its people.

The establishment of cultural, educational and economic ties between the two most powerful nations on the planet is a prerequisite to their peaceful interaction. Ignorance breeds mistrust, and language is the obvious route to cultural understanding, so Chinese language instruction should be available throughout our educational system.
Senator Alexander summarized the situation clearly and eloquently when introducing the act, “History has shown that the modest dollars we’ve spent on education programs have done far more good than hundreds of billions of dollars in foreign aid. We can argue, we can send diplomats, we can build up our defenses, we can assert our position, we can spend money on foreign aid, but we all know there’s only one thing that’s worked best and that is when we get to know each other better.”

Contact your representatives and let them know that you support this bipartisan bill.

The Language Acquisition Device
Larry Bachus and Dr. Clara Mojica-Díaz argue that we should make the most of children’s natural ability to learn languages

Teaching French with TV5
Tania Bennett explains how TV5 not only brings French to life for students, but also provides teachers with a wealth of resources