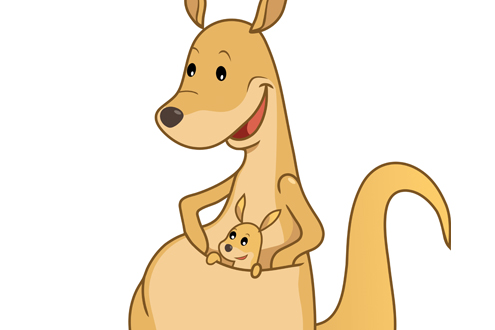 Being a marsupial, a mother kangaroo carries her young in her pouch. Kangaroo words do the same thing: Within their letters they conceal a smaller version of themselves — a joey, which is what a kangaroo’s offspring is called. The joey must be the same part of speech as the mother kangaroo, and its letters must appear in the same order.

The special challenge of kangaroo words is that the joey must be a synonym; it must have the same meaning as the fully grown kangaroo. A plagiarist is a kind of liar. A rapscallion is a rascal. On the job, your supervisor is your superior. And (one of the best pairings) people who are rambunctious are also raucous.

I’ve trained as many kangaroo words as I could to hop through this poem:

Kangaroo words are precocious and precious,
Flourishing, lush words that truly refresh us.
We’re nourished; they nurse, elevate, and elate us.
We’re so satisfied when their synonyms sate us.

Kangaroo words both astound us and stun.
They’re so darned secure that we’re sure to have fun!
With charisma and charm, they’re a letter-play wonder.
They dazzle and daze with their treasures, down under.

Richard Lederer M.A.T. English and Education, Ph.D. Linguistics, is the author of more than 40 books on language, history, and humor. His new book A Tribute to Teachers, is available now
at his web site — www.verbivore.com.