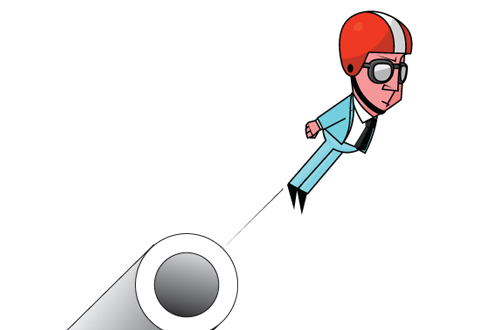 At the end of the 19th century, a crisis occurred in the Barnum and Bailey Circus. The man who was shot out of the cannon every day was asked by his wife to quit his high-risk profession, much to the distress of the great Phineas Taylor Barnum. P.T., whose wit was equal to his showmanship, summoned the fellow and said, “I beg you to reconsider. Men of your caliber are hard to find.”

Barnum, of course, was perpetrating a playful pun on the word caliber, which, from its earliest beginnings, meant “the diameter of a bullet or other projectile.”

Whatever you feel about gun-control laws and the Second Amendment, our high-caliber English language is going great guns. Let’s go gunning for the guns that stand ready to fire when we speak and write:

bite the bullet. Visit a Revolutionary War battle site such as Fort Ticonderoga, and you may see some gruesome artifacts in its museum — bullets with teeth marks in them. Possessing no real anesthesia to ease the agony of amputation, long-ago surgeons offered wounded soldiers the only pain reducer they could — a bullet to bite hard on. Just thinking about such trauma is enough to make me sweat bullets. After anesthesia was introduced in the United States in 1844, the expression came figuratively to mean “to deal with a stressful situation resolutely,” as in Rudyard Kipling’s lines:

a flash in the pan. This phrase sounds as if it derives from the way prospectors pan rivers for gold. In truth, though, a flash in the pan refers to the occasional misfiring of the old flintlock muskets when the flash of the primer in the pan of the rifle failed to ignite the explosion of the charge. It is estimated that such misfirings ran as high as 15 percent, leading a flash in the pan coming to mean “an intense but short-lived success or a person who fails to live up to his or her early promise.”

go off half-cocked. Muzzle loaders, then as now, had a half cock, or safety position, for the gun’s hammer that back-locked the trigger mechanism so that the weapon couldn’t be fired. The half-cock position doesn’t generate enough power to make sparks to fire the pistol, so when a person goes off half-cocked (or at half cock), he or she is not in control of the situation.

skinflint. In many parts of early America, necessities such as flint were scarce. When one side of a flint used in a flintlock weapon had worn away, it lost proper contact with the frizzen and caused inadequate sparking to set off the powder charge. Faced with this problem, some gun owners would skin, or sharpen, the flint with a knife, creating a bevel in the flint, which could then make full contact and generate an adequate shower of sparks. A fellow who skinned his flint was looked upon as being a parsimonious, penny-pinching, frugal, stingy cheapskate — a veritable skinflint.

ramrod. A ramrod is a long piece of metal or wood that rams the ball and patch down the barrel of a muzzle-loading firearm and sets them against the main powder charge. Eventually, ramrod took on the added meaning “a person marked by rigidity, stiffness, and severity.”

snapshot. Shutterbugs have long been partial to gun terminology, seeing parallels between shooting with a camera and shooting with a gun. Snapshot is borrowed from hunting — a shot fired quickly without deliberate aim.

point blank. In ballistics, a weapon fired point blank is one whose sites are aimed directly at a target so that the projectile speeds to its destination in a flat trajectory. By extension, a point-blank question or accusation is one that is direct, blunt, and straight to the mark. The opposite of point blank is hanging fire, which means “undecided, up in the air, delayed.” In munitions, hanging fire describes a delay in the explosion or discharge of a firearm.

Richard Lederer M.A.T. English and Education, Ph.D. Linguistics, is the author of more than 40 books on language, history, and humor. This excerpt is from his new book Amazing Words,a career-capping anthology of bedazzling, beguiling, and bewitching words available now at his web site — www.verbivore.com. Write him at [email protected]