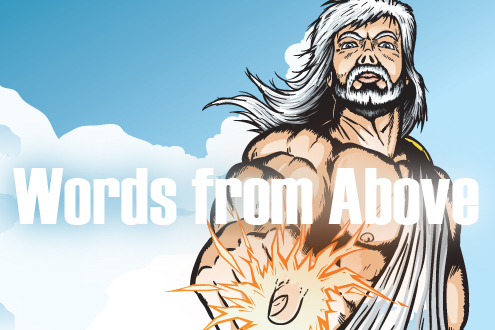 Among the literary sources that flow into our English language, mythology is a major tributary. We who are alive today constantly speak and hear and write and read the names of the ancient gods and goddesses and heroes and heroines, even if we don’t always know it. For example, jovial, an adjective that means “merry, inspiring mirth,” comes from Jove, the name the ancient Romans gave to the king of their gods, because it was a happy omen to be born under the influence of his planet.
Welcome to the pantheon of gods and goddesses, heroes and heroines, and fabulous creatures that inhabit the world of classical mythology and the words that echo them:

Amazon. The original Amazons were an ancient nation of female warriors who cut off their right breasts in order to handle their bows more efficiently. Amazon originally meant “breastless”; it now means “a strong woman,” especially one who works for an online purveyor of books and other products.

Aphrodisiac, venereal, venerate. The goddess of love and beauty gives us many words from both her Greek and Roman names, Aphrodite and Venus.

Herculean. The great Greek hero Hercules needed all his power to complete twelve exceedingly laborious labors. We use a form of his name to describe a mighty effort or an extraordinarily difficult task.

Hermaphrodite, mercurial. A hermaphrodite is a plant, animal, or human being possessing both male and female reproductive organs. The word unites the Greek deities Hermes and Aphrodite, who had a son named Hermaphrodite. Because of its fluidity and mobility, quicksilver is identified by the more common label mercury, the Roman name for Hermes, the winged messenger of the gods. Mercury has also bequeathed us the adjective mercurial, meaning “swift, eloquent, volatile.”

Odyssey. Odysseus, the most famous of all of Homer’s creations in the Iliad and The Odyssey, spent ten years after the fall of Troy wandering through the ancient world and encountering sorceresses and Cyclopes (monsters with 20/ vision). The wily hero’s name lives on in the word we use to describe a long physical or spiritual journey marked by bizarre turns of events.

Panic. The frenetic Greek nature god Pan was said to cause sudden fear by darting out from behind bushes and frightening passersby. That fear now bears his name.

Siren. The hero Odysseus was tempted by mermaids who perched on rocks in the sea and lured ancient mariners to their deaths. Their piercing call has given us our word for the rising and falling whistle emitted by ambulances, fire engines, and police cars.

Stentorian. In Homer’s Iliad, the Greek herald Stentor was a human public address system, for his voice could be heard all over camp. Today, the adjective form of his name means “loud-voiced, bellowing.”