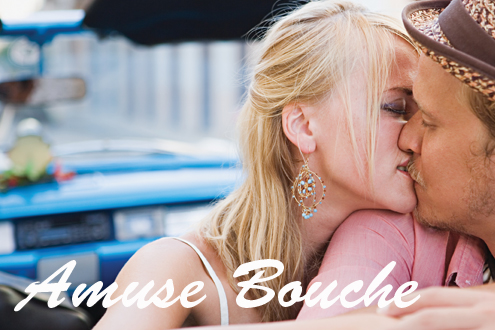 Richard Lederer serves up tidbits from the home of haute cuisine

Cliché comes to us from the Old French cliquer, “to click.” That’s the sound printers used to make when they took a wood engraving and struck it into molten lead to make a cast. This mold was a stereotype, from the Greek stereos, “solid,” which was used to reproduce a picture over and over. Hence, the metaphorical stereotype, which forms a fixed, unchangeable image in the mind’s eye.

Clichés begin their lives as imaginative expressions and comparisons. That’s how they become clichés. Like a phonograph needle, our words settle into the grooves that the clichés have worn into our speech and writing. Phrases that once possessed power become trite, hackneyed, and lifeless — words that themselves are clichés for clichés.

Using clichés is as easy as ABC, one-two-three, pie, falling off a log, shooting fish in a barrel, and taking candy from a baby. They make us happy as a clam, lark, kid in a candy shop, and a pig in… slop.

But if you want to hit a bull’s eye, the spot, the jackpot, the ground running, the ball out of the park, and the nail on the head, then you should avoid clichés like the plague.

Covivant. What do you call the person with whom you are romantically entangled and with whom you are living? Friend, boyfriend, and girlfriend are too coy and do not identify the live-in arrangement, nor do lover, mistress, and paramour, even though they are fine, old words. Cohabitor is a mouthful that is cold and passionless, while partner has recently narrowed to describe only gay couples (and sounds too businesslike to me). Roommate and POSSLQ (“persons of opposite sex sharing living quarters”) identify the joint living arrangement but not the emotional arrangements, while significant other suggests a close, caring relationship but not necessarily the cohabitation.

My candidate for the bon mot to catch and crystallize the person living with you in what used to be called “sin” is covivant. The word captures and coalesces the intimacy of lover and significant other and the cohabitational accuracy of roommate and POSSLQ. Fashioned from the Latin co, “together,” and the French vivant, “living,” covivant is bilingually endearing. Its Latinness communicates a sense of permanence and stability, and its Frenchness sprays the perfume of romance.

Inflammable. Derived from the French enflamer, inflammable used to appear as a warning meaning “Don’t light a match here.” Despite the fact that nobody was befuddled by the adjective inflammatory, a number of unfortunate souls, seeing inflammable on a fuel tank label, reasoned that the in- meant “not” and was thus the equivalent of “incombustible.” As a result, flammable has been adopted, with its clear meaning “combustible,” and is opposed by the equally clear nonflammable. But inflammable survives, so that flammable and inflammable now mean the same thing.

Flammable and inflammable are the two most notorious examples of apparent opposites that turn out to mean the same thing, but they are not alone: a slim chance and a fat chance are the same, as are a caregiver and a caretaker, a good licking and a bad licking, passive and impassive, heritable and inheritable, and “What’s going on?” and “What’s coming off?”

This whole business of opposition and sameness makes the head spin and the mind boggle. How can sharp speech and blunt speech be the same, while a wise man and a wise guy are opposites? How can quite a lot and quite a few be the same, while overlook and oversee are opposites?
If button and unbutton and tie and untie are opposites, why are loosen and unloosen and ravel and unravel the same? How can invaluable objects be more valuable than valuable ones? And why are pertinent and impertinent, canny and uncanny, and famous and infamous neither opposites nor the same?

Love. The most charming derivation for the use of love to indicate “no points” in tennis is that the word derives from the French l’oeuf, “the egg,” because a zero resembles an egg, just as the Americanism goose egg stands for “zero.” But un oeuf, rather than l’oeuf, would be the more likely French form, and anyway, the French themselves (and most other Europeans) designate “no score” in tennis by saying “zero.”

Most tennis historians adhere to a less imaginative but more plausible theory. These more level heads contend that the tennis term is rooted in the Old English expression “neither love nor money,” which is more than a thousand years old. Because love is the antithesis of money, it is nothing.