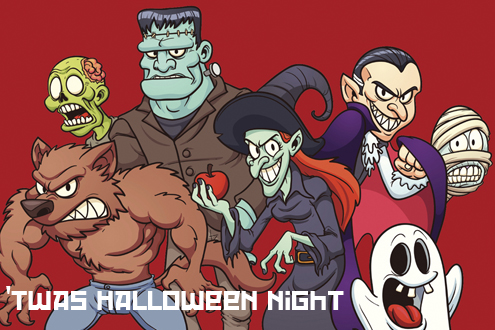 Richard Lederer and the spooken word, with no apologies whatsoever to Clement Clark Moore

’Twas Halloween night, and all through the house,
All the creatures were stirring and eating a mouse.

The monsters had gathered to plan and prepare
For all trick-and-treaters they wanted to scare.

Each creature stepped forth and performed energetically
Their Halloween act and did so alphabetically:

The Abominable Snowman, known as a Yeti,
Celebrated the night by tossing confetti.

The Bats had a blast, and they left us aghast!
Through the flap in the bat door they flew out so fast.

A Cyclops awoke, afflicted with pink eye.
In a bad-tempered mood, he gave us the stink eye.

Count Dracula rose, as he does at night often.
And the whole house was racked by his terrible coffin.

Frankenstein sat bolt upright in his ’lectric chair,
While his bride complained loudly, “I’ve nothing to wear!”

The Ghosts were all moaning. Their voices were heated.
They started their meeting with “Let’s all be sheeted.”

A five-legged Ghoul only mummies could love
Wore polka-dot trousers that fit like a glove.

Godzilla told jokes. Please don’t think me a louse:
He wasn’t that funny, but he brought down the house.

King Kong climbed the walls and chanted some voodoo.
All over the halls, monkey see, monkey doo doo.

The long Loch Ness Monster, her eyes rather bleary,
Decided to go for a swim in Lake Eerie.

A chummy old Mummy was no crumby dummy.
She dumped treats yummy, gummy down her scummy tummy.

A Skeleton offered a toast quite upbeat,
Raised a mug of formaldehyde: “Bone appétit!”

A Howl-o-ween Werewolf ate garlic that night.
All agreed that his breath was much worse than his bite.

Into the room crept a Witch quite inept.
She had just cleaned her house, and the hag overswept.

All the monsters exclaimed, as they lurched out of sight,
“Happy Haunting to all — and to all a good fright!”

Richard Lederer, MAT English and education, PhD linguistics, is the author of more than 40 books on language, history, and humor. This installment is from the new Monsters Unchained. Signed copies available at www.verbivore.com.