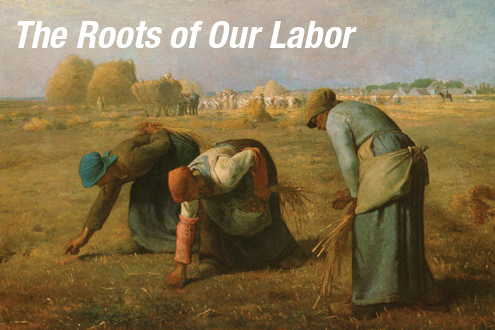 Labor Day is a yearly national tribute to the contributions of American workers to our strength and prosperity. But long before that, the importance of work was enshrined in our last names.

The pattern of naming in the English language began with single names, because when people lived together in small communities, the supply of names was large enough that none had to be repeated. Most first names are very old. Girls have been named Mary (“star of the sea”) and boys John (“gift of God”) for many centuries.

As social groups grew more voluminous, single names began popping up more often, and a system of distinguishing among people with the same first names had to be invented. Thus, villagers began to add a bit of descriptive information to the given name, and that’s how we got last names, or surnames. The sur in the word comes from the Latin super and means “above and beyond.”

Some of these surnames began life as descriptions of a person’s coloring—Black, Brown, White, Reid (Red); size—Small, Little, Longfellow; geography—Churchill, Rivers, York; or personal qualities—Smart, Wise, Strong, Swift. One who refused to consume alcohol might have picked up the name Drinkwater, a man of great strength Armstrong, and a loyal friend Truman.
Other names are patronymics and matronymics, family names derived from a parent or ancestor. Your name is probably one of these if it begins with Mc, Mac, O’, or Fitz, all of which mean “son of,” or ends with son, sen, ov, or ovich.

The largest category of surnames began as descriptions of the work people did. In the telephone directories of the world’s English-speaking cities, Smith, which means “worker,” is the most popular last name by a wide margin over its nearest competitors, Jones and Johnson (both of which are patronymics, “son of John”). And it is no wonder when you consider that the village smith, who made and repaired all objects of metal, was the most important laborer in the community. Three common expressions that we inherit from the art of blacksmithery are “strike while the iron is hot,” “too many irons in the fire,” and “go at it hammer and tongs.”

It is easy to trace the occupational origins of surnames such as Archer, Barber, Bowman, Brewer, Butler, Carpenter, Carver, Cook, Draper, Farmer, Fisher, Forester, Fowler, Gardener, Hunter, Mason, Miller, Piper, Potter, Sadler, Sheppard, Shoemaker, Skinner, Tanner, Taylor, Weaver, and Wheeler. Other surnames are not so easily recognized but, with some thought and research, yield up their occupational origins.

Here are 30 additional surnames paired with the occupations they subtly signify. Your moniker could be in the list:
Bailey—bailiff, Clark—clerk, Cohen—priest, Coleman/Collier—coal miner;