Richard Lederer on the gender gap in grammar 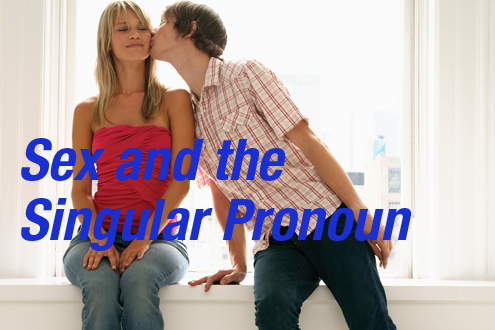 In its annual vote on January 8, the American Dialect Society chose they used as a gender-neutral singular pronoun, as its 2015 Word of the Year. More than 300 linguists, lexicographers, and grammarians honored they for its burgeoning use as a pronoun to refer to a single person, often as a conscious choice by a speaker or writer who rejects the traditional gender-binary he and she.

While this decision by the 127-year-old American Dialect Society may cause you to raise an eyebrow, break the point off your pencil, or swallow your chewing gum, I beseech you to read on:

You’re sitting at a table, and after a long period of time elapses, someone finally brings the food. Why are they called the “waiter”?

I’ve used this quip dozens of times in my talks and asked the audience if anyone has been offended by any grammatical atrocity I have uttered. Almost no one raises their hand.

Take another look at the previous two paragraphs and note that, in each one, I’ve used a form of they to refer to a singular pronoun—someone, anyone, and no one. Why is this usage ubiquitous? Well, one reason is that we have been doing it for centuries, all the way back to Middle English. It’s been more than 600 years (1387) since the poet Geoffrey Chaucer wrote, in The Canterbury Tales, “And whoso findeth hym out of swich blame,/They wol come up…” They as a third-person-singular pronoun abounds in the works of other estimable authors, such as William Shakespeare, William Makepeace Thackeray, and Jane Austen.

It was not until the late 18th century that they in its third-person-singular role was disparaged. That’s when such prescriptive grammarians as Robert Lowth and Lindley Murray decreed that indefinite pronouns are singular. The reasons for this linguistic holding were more cultural than structural. In 1746, for example, John Kirkby’s “Eighty-Eight Grammatical Rules” included as Rule #21 “the male gender is more comprehensive than the female.” In other words, when it comes to pronouns, the male embraces the female. Bwa-ha-ha!

Thus we confront the matter of sex and the singular pronoun. While all other pronouns avoid reference to gender, the third-person-singular pronouns in English he and she are gender specific. But we are no longer completely comfortable with the male chauvinist “Each student should underline in his textbooks so that he can achieve his fullest academic potential” or the clunky “Each student should underline in his or her textbooks so that he or she can achieve his or her fullest academic potential.” That, my friends, is what I call sexually transmitted tedium.

They has long been a graceful solution to the most nettlesome problem in sexist language—the generic masculine pronoun: “Each student should underline in their textbooks so that they can achieve their fullest academic potential.” Bill Walsh, copy editor for the Washington Post, describes they as “the only sensible solution to English’s lack of a gender-neutral third-person-singular personal pronoun.”

We all use you as both a singular and plural second-person pronoun. Why not the same for they in the third person? They has been rapidly moving toward singular status, in the manner of you. We’ve been doing it for centuries, and we’re doing it today:

* Everyone attended the party, and they had a rockin’ time.

* If somebody wants to cut class, we can’t stop them.

* The cellular customer you have called has turned off their phone.

* We are required by law to post the pharmacy’s number on the medication vial in case the customer has questions about their drug.

The astronomer Galileo Galilei was branded a heretic because he insisted that the earth was not the center of the universe but, in fact, revolved around the sun. Despite his perilous status, Galileo urged others to conduct objective experiments so that they could see the truth for themselves.