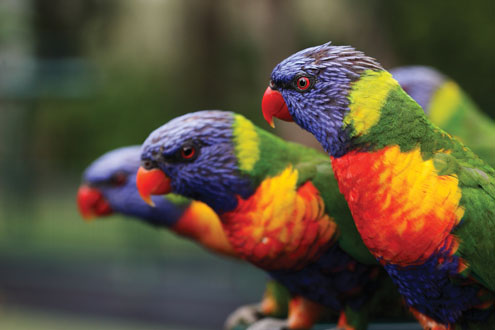 This past January, I traveled to Melbourne to watch Aussie Millions poker action and the Australian Open tennis championships. During my three visits to the Down Underworld, I have come to love the Australian people. They are a patriotic, sports-crazed, fair, and friendly society, except for their annoying habit on the trams of constantly standing up and offering me their seats.

Australia is a land of many paradoxes. It is an outpost of English culture and English speaking tacked on to the southern tail-end of Asia. Just beyond the horizon from the teeming millions of Southeast Asia, Australia is stunningly underpopulated. With a land mass almost the size of the continental United States, Australia is inhabited by only about 22 million souls.

When we think of Australia, we picture a wide, sun-baked Outback tended by a breed of tall, lean cattlemen and sheep farmers who all look like Paul Hogan and Greg Norman. But Australia is the most urbanized society in the world, with more than 70 percent of its population packed into its eight major cities, seven of them along the huge coast. Almost half of all Australians live in Sydney and Melbourne.

They call the land “Oz,” “Godzone” (a contraction and clipping of “God’s Own Country”), and “best bloody place on earth, bar none.”

During my stays in Oz I’ve been able to pick up a sense of “Strine” (Australian). Most prominent is the accent. What we hear as “ay,” Aussies pronounce as “eye.” As a result, our “Good day, mate” comes out as “G’die, mite” (with mite used almost exclusively bloke to bloke and never across the genders). Where we sound “eye,” they say “oy,” as in “soydes” and “floyt.” Reversing the two sounds, where Americans say “oy,” Aussies say “eye,” causing lawyer to be pronounced liar. Hmm.

You wouldn’t want to miss the delights of Australia just because of a little thing like the language barrier. Any American abroad in Australia will be struck by certain differences in vocabulary, many of them British: among/amongst, apartment/flat, automobile/motor car, bathroom/toilet, drug store/chemist, elevator/lift, french fries/chips, immediately/straightaway, potato chips/crisps, ranch/station, takeout/takeaway,
traffic circle/roundabout.

The Yank eye will notice differences between Aussie spelling and ours. In fact, it is impossible to go through a single page in a book or street in a town without being aware of a different orthographic universe. The most prominent divergence is in words ending in -or in the States but -our in Australia — behaviour, colour, flavour, harbour, honour, labour, odour, and vigour — and -er in the States but -re in Australia — centre, theatre. Additional orthographic differences include airplane/aeroplane, jail/gaol, jewelry/jewellery, program/programme, tire/tyre.

Some disparities exist between U.S. and Aussie usage: different from/different to, seven tons/seven tonne, Australia is… /Australia are…, in the hospital/in hospital, separate from/separate to.

One final tip for the traveler/traveller: Although Australia sits closer to the bottom of the world than any other highly urbanized civilization, the expression “Down Under” is rarely uttered by the Australians themselves, except to appeal to the occidental tourist.

Richard Lederer, M.A.T. English and Education, Ph.D. Linguistics, is the author of more than 35 books on language, history, and humor. Explore his web site www.verbivore.com. Write him at [email protected]
Find your next career move here!