Lessons from the Ukrainian Conflict 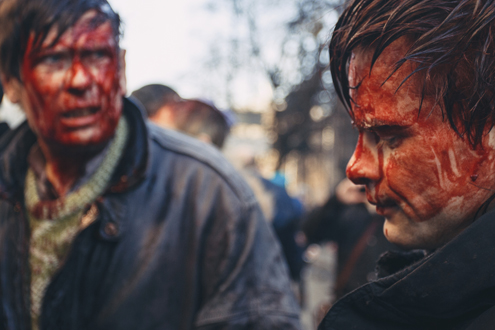 Crimea is my motherland; I was born there. My roots and extended family are deeply connected to Crimea, the Ukrainian territory that recently voted to join Russia. Moscow is my second home, and I spent nearly a decade living, studying, and working in the Russian capital before immigrating to the U.S. This August, I spent a week in Moscow and a week in Crimea to see and decide for myself what has been happening there this year. What follow are my personal notes and conclusions as a Crimean-born, Russian-raised language teacher.

The Crimean people voted in May to join Russia, and the territory exchanged hands with no violent outbursts. After Russia took over, there were no organized forces in Crimea to stand up against it, and the change happened peacefully. Why did Crimea decide to secede from Ukraine, bringing such drastic political change? After talking to many local people this summer, I believe that the answer is language related.

Crimea became a part of Ukraine in 1964 by the authoritative decision of the then-current Soviet leader, Nikita Khrushchev. Despite this administrative change, Russian continued to be the primary language of the Crimean Peninsula.

The Crimean Peninsula has always been a crossroads of cultures and languages. Located on the Black Sea, it was a point of interest to the Turks and Tatars, the Russian Empire, the Soviet Union, and even the ancient Greeks. Out of this rich heritage evolved deep traditions of peaceful and multilingual co-existence.

Now, more than 25 nationalities are officially registered in Crimea. According to the most recent Ukrainian Census, from 2001, there are three major nationalities: Russians (58%), Ukrainians (24%), and Crimean Tatars (12%). However, according to same census, 77% declared Russian as their native language, 10% claimed Ukrainian as their native language, and Crimean Tatar–speakers made up 11%. The language dynamic was never easy, but the special status of the Autonomous Republic allowed a Crimean regional government to deal with the situation of multiple languages in a peaceful way. The Autonomous Republic of Crimea was governed by its own constitution, which declared three official languages: Russian, Ukrainian, and Crimean Tatar. According to an independent study by the Kiev Intern­ational Institute of Sociology in 2014, 97% of Crimeans claim to speak Russian.

The peninsula, surrounded by the Black Sea, is a popular resort, and one of its main industries is tourism. Local residents make money renting apartments and selling fresh fruit to summer visitors making the most out of the short summer and sunny beaches. Prevalent tourism sets a tone for peace and open-mindedness among guests and local cultures, including respect for other languages.

Maidan resistance in Kiev in February 2014 and the new Ukrainian government were historic shifts in Crimea’s trajectory. With Ukrainian patriotism on the rise, the new government proposed to make Ukrainian the only official language across the country. The government’s first hearing ignited uproar in Russian-speaking territories, such as Donetsk and Lugansk in Eastern Ukraine and Crimea. This new language policy not only scared the Russian-speaking population, who felt they were not welcome in this new country, but also created a strong, united resistance.

After the breakup of the Soviet Union, Crimea found itself part of a new country — Ukraine — governed by a language the majority of Crimean residents did not speak. For the last two decades under Ukrainian rule, Crimea lived in linguistic limbo. The mainly Russian region had everyday challenges communicating with the Ukrainian-speaking government.

According to Mihail Tetanuk, a former Crimean official, “Every document from the state government was in Ukrainian, so it needed to be translated for Crimean government use. Likewise, every document produced locally had to be translated from Russian into Ukrainian in order to be sent to Kiev. Every single document and file was going back and forth. This process created delays and difficulties in everyday work. The region, made up of 97% Russian speakers had to communicate with the central government through the mass translation of every document and every minor decision.”

It was even more difficult for ordinary people in their daily routines. They did not have free translators at their service. Mundane tasks were difficult. Sales transactions of any kind, such as car and house sales or business deals, often required paid translation services. The instructions and forms were in Ukrainian and were required to be filled out in Ukrainian. Inquiries sent to passport services, county clerk offices, and courts had to be, by law, answered in Ukrainian. It was creating an everyday problem.

As local people shared with me their language stories, I learned that medical vocabulary was an especially difficult topic. The pharmacy was another site of language-related stress. The law required instructions for over-the-counter and prescription medication to be printed in Ukrainian. Special medical vocabulary in Ukrainian posed a challenge for many. The situation was complex: your doctor would speak to you in Russian, but anything printed was required to be in Ukrainian. The majority of elderly people could not understand the language of their medical instructions, putting them in danger.

On the other hand, I heard positive and beautiful stories. I saw a great respect for Ukrainian and an interest in learning it. I met 65-year-old Elena Sinina, who told me that her favorite TV series was in Ukrainian. She learned a great deal of the language following this show over the years. She loves Ukrainian now and considers the language very attractive and musical.

The stories people shared with me during my visit to Crimea this August shed some light on the language difficulties and everyday problems encountered in the many countries living at the crossroads of regional and state languages.

Countries with two or more main languages will always be areas of increased risk for misunderstandings and a constant search for balance. Areas with multiple languages will always be in need of compromise, mutual respect, and caution. In such places, conflict may spark very quickly, and burn extra hot. Language is how a nation represents itself; it is understandable why the new Ukrainian government tried to increase the role and importance of a national language and promoted Ukrainian as the only official tongue. However, in multilingual regions, such moves hurt the majority of people.

This time, the language conflict took place in Ukraine. But it could happen anywhere. It is the universal language problem. Can a monolingual state capital understand multilingual regions? Would a monolingual person be able to feel and think like a multilingual one? Language dynamics may look very complicated, but when it comes to government decision-making regarding the languages, it all boils down to one simple choice: inclusion or exclusion. Do we (the government) decide to exclude people not actively using the main language of the country and thus provoke confrontation? Or do we instead choose to include everyone for the sake of peace?

When the Ukrainian government started pushing the decision of one state language, Crimea found itself on the brink of war. I’ve talked to many people in Crimea, the majority of whom think that the main reason Crimea managed to avoid war was the Russian military port Sevastopol, located on the Crimean Peninsula. It is a hub of Russian history and national pride. Being an official Russian port, Sevastopol has been supported by funds from Moscow for decades. Locals believe that the new Ukrainian government realized that Russia would not let their military port go without a fight. So, after Crimea voted to join Russia, they let it go without defending it to avoid direct confrontation with Russian military forces. In a way, Crimea was spared from war by its own city, Sevastopol.

As a language teacher, I know what language means to people and the importance and power it has in society. It has the power to influence events as dramatic as wars. It also has the power to bring peace and unity to any group of people through the sharing of culture. It is one of the most powerful unifying forces for people, yet it can also divide them. In order to protect the nation, its culture, and its people, one must first respect, welcome, and protect its languages.

Angelika Putintseva started as a journalist in Ukraine, with her first articles published in 1984. Since then, she has been published in Ukraine, Russia, India, and U.S. on topics of international relationships, business, and culture. She holds an MA in journalism and an MA in teaching foreign languages.