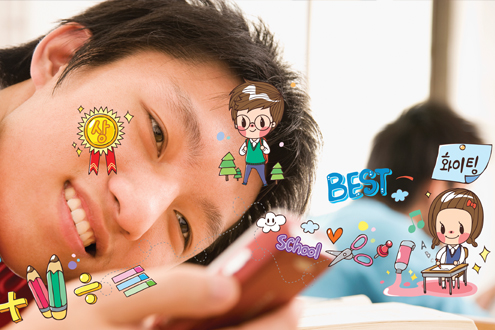 Complexity theory (CT) deals with complex, dynamic, and nonlinear systems. When I first encountered CT some 20 years ago, it was not in the context of language. However, I couldn’t think of many things that were more complex, dynamic, and nonlinear than language (Larsen-Freeman, 1997). And it soon became evident to me that CT had the potential to teach us many lessons useful in language teaching and learning.

It is important to note that in CT “complex,” “dynamic,” and “nonlinear” have different meanings from what one normally thinks of. Let me start with “complex.” “Complex” does not mean complicated. Although the components that make up a complex system may be many and may be different from each other, what makes a system complex is the quality of emergence. Emergence is “the spontaneous occurrence of something new” (van Geert, 2008, p.182) that arises from the interaction of the components of a complex system, just as a bird flock emerges from the interaction of individual birds.

The lesson from the emergence of complexity was brought home to me some time ago, when I read science writer James Gleick’s description of the dynamics of complex systems: “The act of playing the game has a way of changing the rules” (1987, p. 24). Now, Gleick was not writing about linguistic rules. However, reading this line from his book was an epiphany to me. I understood, contrary to my training as a linguist, that language was not composed of a finite set of fixed rules, but, instead, that the language system as we knew it was continuously emerging through speakers’ interactions. This suggested to me that our students would be well served by “playing the [language] game.” By this I mean that they should be encouraged to use the language meaningfully and purposively. In so doing, their language resources would change — becoming more target-like — if that was the goal.

The dynamism of complex systems is key to contributing to such an outcome. A complex system is about becoming, not being. It was this lesson from CT that helped me make a connection to the inert knowledge problem, which had troubled me for some time. The inert knowledge problem, given its name by Alfred North Whitehead many years ago, refers to the fact that students appear to be able to do something in the classroom at one time but not at a later time. In other words, what they have acquired has become inert — unavailable to use for their own purposes at a later time and place.
There are many factors responsible for the inert knowledge problem; however, I reasoned that if language were to be taught in a more dynamic fashion, students wouldn’t have to overcome inertia to activate what they know. Teaching students grammar by giving them rules and having them apply them in written exercises is a time-honored procedure, but perhaps it is not the most efficient way to overcome the inert knowledge problem. This led me to coin the term “grammaring,” a term I feel is more apt for what we teachers should be trying to achieve. Grammaring involves teaching students to use grammar structures accurately, meaningfully, and appropriately through dynamic tasks and activities (Larsen-Freeman, 2003).

As for the nonlinearity of complex systems, “nonlinear” means that the effect is not proportionate to the cause. For instance, if I give my desk chair on wheels a big push back from my desk and it only moves an inch or so, the result is nonlinear. Conversely, if I push the chair back gently, and it goes careening to the other side of the room, this is also a nonlinear reaction. What is the lesson of nonlinearity in language teaching and learning?
Well, one example is to think of the poor teacher who spends a great deal of time and effort getting students to learn some particular grammar rule perhaps never quite succeeding. The teacher in the next grade, though, has only to remind students once of the particular rule, and they immediately catch on. The second teacher benefits from the efforts of the first in a nonlinear way.

There are many lessons that a CT perspective has given me, and I will be speaking of others in Portland. Let me elaborate on one final lesson before I conclude this brief introduction. Sometimes complex systems are referred to as “complex adaptive systems.” Calling them adaptive recognizes their capacity to change in response to a changing environment. One way that I think this characteristic applies to language is through what is called co-adaptation (Larsen-Freeman & Cameron, 2008). Just as children benefit from speech customized for them, second language learners can benefit from the modifications or adaptations that are made in speech to them in order to enhance its comprehensibility for them. But notice I wrote co-adaptation. The language resources of both conversational partners are changed by the interaction. I myself have experienced this many times as I accommodate to my students, such that over time, I can feel my own language use shifting — not an uncommon experience for language teachers.

A more practical lesson from the notion of language as a complex adaptive system is my proposal that we should not only be teaching students language, but we should also be teaching them to adapt (Larsen-Freeman, 2013a), i.e., teaching them to take their current language resources and mold them to new situations. One way that this can be accomplished is to use iteration: returning to an activity several times, but changing the activity a little bit each time (Larsen-Freeman, 2013b). For example, a well-known activity is asking students to tell a stories to their classmates. Teachers ask students to do so in pairs, where they are given four minutes to tell their story to a partner, who then reciprocates. Next, students change partners and tell their new partners the same story in three minutes. Finally, they change partners once again, but this time, they only have two minutes each to tell their stories. Through this progression, the challenge is renewed for students, and they are given the opportunity to adapt their resources to changing conditions. What is interesting is that not only does students’ fluency improve, but students’ narratives also get more accurate and linguistically complex. With iteration and adaptation, then, the students’ language resources change, not in an additive way, but in a way that transforms the language resources that students draw on.

There are many ways that CT has stimulated new thinking on my part. I believe that there are many lessons to be learned from it. However, I am not the only one who is enthusiastic about its transformative potential. No less an authority than the famous astrophysicist, Stephen Hawking (2000) has called the present century “the century of complexity.”

Diane Larsen-Freeman is professor emerita of education, professor emerita of linguistics, and research scientist emerita at the English Language Institute at the University of Michigan, Ann Arbor. She is distinguished senior faculty fellow at the SIT Graduate Institute. She is also visiting professor of educational linguistics, University of Pennsylvania. She has written about SLA (An Introduction to Second Language Acquisition Research, with Michael Long, 1991), grammar (The Grammar Book: An ESL/EFL Teacher’s Course, with Marianne Celce-Murcia, 3rd ed., forthcoming), language teaching (Techniques and Principles of Language Teaching, 3rd ed., with Marti Anderson, 2011), and complexity theory (Complex Systems and Applied Linguistics, with Lynne Cameron, 2008). She has also written about teaching grammar (Teaching Language: From Grammar to Grammaring, 2003), and she has directed a grammar series (Grammar Dimensions: Form, Meaning, and Use, 4th ed., 2007).

Dr. Larsen-Freeman received the Heinle/Cengage Lifetime Achievement Award in 2000. Her book on complexity theory received the 2009 Kenneth W. Mildenberger prize from the Modern Language Association. Also in 2009, the Hellenic American University conferred on Dr. Larsen-Freeman an honorary doctoral degree in humanities. Dr. Larsen-Freeman was awarded a Fulbright Distinguished Chair at the University of Innsbruck in 2010 and the American Association for Applied Linguistics’ Distinguished Scholarship and Service Award in 2011. She is a former editor of Language Learning and currently serves as chair of the board of directors for the journal. On Mar. 29, 2014, she will be delivering the Saturday keynote address at the International TESOL Convention in Portland, Oregon. To address the convention theme of “Explore, Sustain, Renew,” she will be speaking about lessons we can learn from complexity theory in order to keep our language-teaching practice vital.