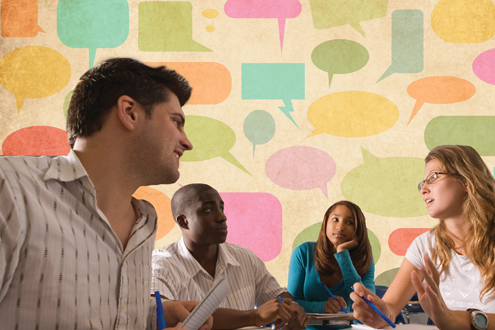 Laurie A. Massery offers practical tips to make the most out of talking in any language

Do you think teaching a conversation course is easy?
Do you imagine that you can walk into class and just start talking? If you do, you might be surprised to find out that teaching a conversation course in any language, whether it is your first, second, or third, can be challenging for a variety of reasons. For starters, having to teach such a course within the confines of an actual classroom can feel artificial. As a result, creating a comfortable environment conducive to oral interaction among learners can be difficult. Instructors also face the task of implementing structure in such courses, not only for themselves but for their students as well. Unlike content classes, for example, conversation courses require little to no lecturing as they are — or should be — highly student centered and interactive. For this reason, instructors often assume the role of facilitator in these environments above any other role. This article offers some pointers for conversation instructors who are either new to the job or just looking for ideas. In the paragraphs that follow, I look at the use of textbooks, group work, peer evaluations, and new technologies that encourage conversation among language learners.

Textbooks
As mentioned above, providing structure in a conversation class can be a puzzling task. In my experience, a good way to stay organized and augment student interaction is to include a textbook or course packet specifically designed for teaching conversation. Textbooks that are designed for conversation courses often provide learners with short readings, useful activities, and practical and colloquial vocabulary, as well as grammatical examples and visuals that students can examine and refer to regularly. In Spanish, for example, some contemporary textbooks (see Revistas third and fourth editions, for example) incorporate readings with conversational language and idiomatic expressions that learners can actually employ in oral exchanges with native speakers of the target language. Furthermore, for language instructors, such texts are useful for assigning homework, designing group or pair exercises, and creating vocabulary reviews.

Group work and peer evaluations
One of the primary learning outcomes for a conversation course is increased fluency in the target language. For the present article, fluency is defined as the ease and rapidity with which a learner speaks the target language. Therefore, in order to promote fluency in conversation courses, I regularly ask students to work in groups of three, where each learner is assigned a specific role and set of responsibilities.

By assigning each student a specific role within the group, individual learners are given explicit duties for which each one is accountable throughout the exercise. While group members one and two (Conversation Leader and Conversation Contributor) are in charge of the flow and success of the exchange, member three (Peer Evaluator) serves as the eyes and ears of the instructor. As a result, group member three (Peer Evaluator) is responsible for evaluating other group members’ use of grammar, overall fluency (as defined above), clarity of pronunciation, and incorporation of new vocabulary. In my class, for example, these evaluations — which follow a rubric format(1) — are turned in at the end of class. Peer Evaluators (role #3) are encouraged to write comments about individual performances within the group. I suggest compiling these comments throughout the semester in order to create monthly progress reports for students. As a way to safeguard anonymity, I recommend keeping comments made by Peer Evaluators (role #3) unidentifiable to previous group members at all times.

Organizing conversation groups in class
In order to prevent learners from working repeatedly with the same students in class and assuming the same roles and responsibilities, I use what I refer to as the Controlled Random Group Generator in Conversation (CRGG-C).(2) In the classroom, CRGG-C requires the use of two-sided buttons(3) (see figure one) that display both a letter, which allocates students to a specific conversation cluster, and a number, identifying the role and responsibilities of each learner within their group. For example, if an instructor were to have a total of twelve students in his or her conversation course, he or she would need to create a total of four groups (groups A, B, C, and D), each containing three members (A-1, A-2, A-3, B-1, B-2, B-3), in order to accommodate everyone in the class.

The buttons are distributed using a container at the beginning of class, at which time each student selects one at random. After each student chooses a button, the instructor may allow several minutes for students to find others in the class who possess the same letter — therefore belonging to the same conversation group (group A, B, C, or D). Once students identify their group and its members, they are able to settle into their roles and assume their assigned responsibilities within the conversationz. In Table 1, participants’ distinct roles and tasks are outlined in greater detail.
As shown in Table 1, any student who receives the button A-1, for example, belongs to Group A; Group A will ultimately include an additional two members (A-2: Conversation Contributor and A-3: Peer Evaluator). In this particular scenario, Group Member A-1 assumes the role of Conversation Leader, and in doing so becomes responsible for the following acts within the group: initiating conversation,(4) asking preliminary questions, and monitoring the overall flow of the oral exchange. Group Member A-2 (Conversation Contributor) also participates in the conversation, by answering questions, contributing to the general movement of the conversation, and assisting Group Member A-1 (Conversation Leader) in ensuring the overall success of the discussion. Participant A-3, however, assumes the role of Peer Evaluator, whose primary responsibility is to observe individual student performance within the group. Consequently, the Peer Evaluator is responsible for numerically rating his or her group members using the rubric distributed by the instructor at the beginning of class. In my class,only Peer Evaluators receive this rubric, all of which are turned in at the end of class. As mentioned previously, peer evaluations can be used for monthly progress reports and feedback for students.

Creating structure, staying organized, providing a comfortable yet dynamic environment that encourages student interaction in the target language, and preparing learners for oral communication with native speakers of the target language is not an easy task. With this said, however, by incorporating contemporary textbooks specifically designed for conversation, engaging students in peer-evaluated group work, and using programs such as Talk Abroad, students have plenty of opportunities to produce the target language and monitor their progress — both in and outside of the classroom.

Notes
1. Those interested in a copy of the rubric, please contact Laurie Massery directly at [email protected]
2. As a graduate student, I began using CRGG-C to randomly assign students to conversation groups. While I know of other conversation instructors who assign specific tasks and roles to their students during class, to my knowledge, CRGG-C, along with the specific roles and responsibilities mentioned above, have not been previously explicated or executed in this way.
3. Buttons used for CRGG-C can be substituted with any object that has two sides and a flat surface, such as paper or blank stickers, for example.
4. I often provide each group with a conversation sheet that includes questions and topics that the Conversation Leader (role #1) can refer to throughout the conversation. As a way to lower anxiety among group members, the first set of questions or topics is based on the homework. In my experience, providing students with familiar topics that they have already prepared and reviewed ahead of time contributes to comfortable and successful exchanges.