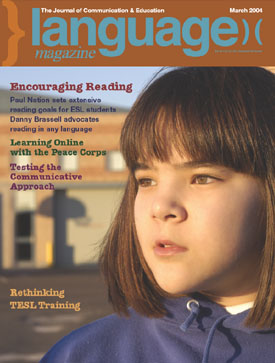 According to a new study, the percentage of the global population that grew up speaking English as its first language is in sharp decline, and an increasing number of people now speak more than one language.

A leading British linguist, David Grad­dol, predicts we are headed for “decades of rapid and perhaps disorienting change, after which a new linguistic world order will emerge.” By 2050, only five percent of people will be native English speakers, down from about seven percent now and nine percent 50 years ago, Graddol said in an article published in the journal Science. Mandarin Chin­ese will top the language table, with English dropping to fourth, behind Hindi and Arabic, and just ahead of Spanish. Rushing up behind will be Bengali, Tamil and Malay — the most rapidly growing languages at present.

But before we start replacing ESL classes with Mandarin as a Second Language, consider what else Graddol has to say, “English is becoming a major mechanism for social and economic exclusion and creating new divides,” he said. “In many parts of the world, English is now regarded as a basic skill, like computer skills, which children learn at an early age so they can study through English later.”

Here in the U.S., the social and economic divides between English speakers and non-English speakers are all too apparent, and very slow progress is being made to close that divide in California, according to the latest evidence (see “ELL Progress Slow in California,” p11). Even if English is not the world’s lingua franca, it is seen by non-English speaking countries as an essential tool, without which children will struggle academically and, eventually, economically. The least we can do is to provide them with this tool.

That would be a start, but it is not enough. In the future, the study predicts, most people will speak more than one language and will switch between languages for routine tasks. Monolingual English speakers may find it difficult to fully participate in a multilingual society. “Native English speakers — particularly monolingual ones — have been too complacent about the status of their language and the lack of need to learn other languages,” Graddol says.

If we are to avoid exacerbating divisions in our own society and being left behind by others, we need to incorporate multilingualism as an educational fundamental now by investing in the future of all of our citizens — increasing spending on ESL programs, encouraging the retention of heritage languages, developing two-way bilingual schools and making foreign languages compulsory from kindergarten.

Dialects
Richard Cameron on the polyglot heritage of Chicago