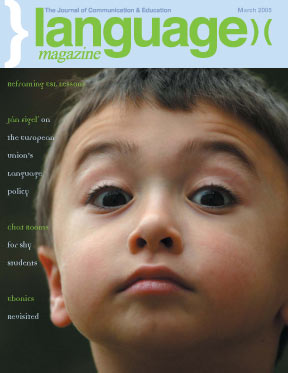 Mr. Bush, buoyed by his second inauguration and the ease with which his old friend, Margaret Spellings, was approved as Education Secretary, proposed his education budget for fiscal year 2006 last month. The President’s budget cuts overall spending on education for the first time in over a decade and proposes to eliminate funding for 48 programs, including Even Start and the Foreign Language Assistance Program.

Despite the extension of No Child Left Behind’s testing and accountability measures into high schools, the budget provides only $56 billion in education funding for the country; a decrease of $530 million or a one percent decrease over his fiscal year 2005 budget request. The proposals provide for only a $319 million total increase for No Child Left Behind programs nationwide.

If enacted, the President’s budget will make it much more difficult for our already struggling schools to meet the demanding standards set for students. Assessment and accountability are important tools in the maintenance of a successful public education system, but they are not the be all and end all. Currently, the federal government funds less than eight percent of the nation’s education program, but is able to demand a lot for its money because schools need every dime they can get.

Of particular relevance to us is the fact that for the third year running, there are no proposed increases in spending for English language learners, the most rapidly growing sector of public school enrollment. Title III would be “level funded” at $676 million.

The proposed program cuts – if enacted by Congress – will have a disproportionate impact on language-minority students, be they children or adults.

Ironically, these proposals do very little to decrease the federal deficit, which is now at a record level of nearly $500 billion a year, thanks to burgeoning military expenditures and tax cuts for the wealthy.

In this issue, European Union Commissioner for Education, Ján Figel´ explains the EU’s goal of each citizen speaking “mother tongue plus two” languages which may seem over-ambitious even for Europe where expenditure on education averages almost three times that of the U.S. However, the European attitude is that such spending is a vital investment not only to secure the integration of the enlarged European Union, but to ensure its prosperity in a rapidly shrinking world.

We need to keep up with our competitors, learn from others and invest in our future. Con­tact your Congressional representatives, Demo­crat and Republican, and make sure that they know that you do not support this budget.

Last Writes
Richard Lederer and the Revenge of Anguished English