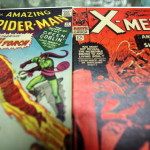 May 2nd is national Free Comic Book Day, and Marvel is offering for the first time a free, multi-story, Spanish language edition, continuing a goal of connecting to a more diverse readership. Last year Marvel teamed up with iVerse Media to release the Marvel Global App that allows fans to download older comics in 12 different languages: Chinese (simplified), Chinese (traditional), Japanese, Korean, Spanish, French, Russian, Hindi, German, Italian, Portuguese, and Hebrew. The Spanish language releases on Free Comic Book Day however, will come out on the same day as the English language versions, removing the usual delay caused by translation.

The Washington Post reported, “A sizable generation of American-born Latino youngsters walk in both worlds, speaking English in school and Spanish at home. For some Spanish-speaking parents, it can be hard to keep up with their English-speaking kids as the next generation dives into American pop culture. For those who like to take the commercial-culture journey with their kids but have a language barrier, these comics could be the first step to sharing a fun universe with their [children].”

Marvel is not only trying to cater to its growing international readership but slowly adapting to the reality of the US population. Spanish is the second most spoken language in the US after English, and since 1980 the number of Spanish language speakers has increased by 210%. From the introduction of Miles Morales, the new half-black half-Latino Spiderman, Ms. Marvel, the Muslim Pakistani American superhero, to a female Thor, and soon to be released all-female Avengers, Marvel has been shifting its titles to be more inclusive of various languages, ethnicities, genders, and faiths.