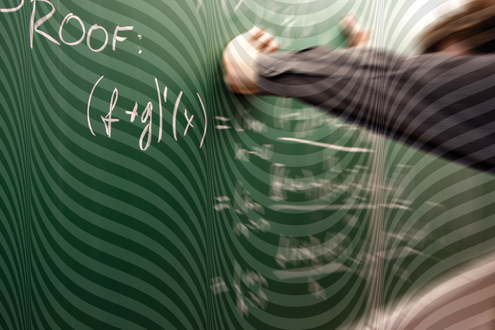 Do you speak math? Not sure what we mean? Well, math can be thought of as a language filled with vocabulary, symbols, and sentence structures. These can make things difficult for students who wish to relate math to their everyday language and experiences. For students learning English as their second language, learning the language of mathematics may seem as though they are simultaneously learning yet another language. And like any language, students have to speak math proficiently in order to use it efficiently.

Although there are many similarities among number systems across the world, mathematics (particularly as taught in schools) is far from being a universal language. English language learners (ELLs) have to learn new words (hypotenuse), concepts (pi), and expressions (3y + 6 = 10(x)), and, in some cases, relearn different procedures (e.g., long division).
English number names are highly irregular. For example, we say fourteen, sixteen, seventeen, eighteen, and nineteen. Shouldn’t we also say oneteen, twoteen, threeteen, and fiveteen? In counting by tens, we have a similar discontinuity. There are forty and sixty, which resemble four and six. But there are also twenty, thirty, and fifty, somewhat related to two, three, and five. If we keep counting up, the numbers above twenty will have the tens first (e.g., fifty-six), whereas for the numbers below twenty we put the ones first (e.g., thirteen).

By comparison, languages spoken in China, Japan, and Korea have a more logical counting system. For example, eleven is ten-one, twelve is ten-two, and so on. This irregularity in English number names has important consequences in basic computations. If you ask fourth graders to add three-hundred-twelve plus thirty-five in English, they will need to convert those words to numbers (312 + 35) and then do the computation. In Japanese, this same request would sound like, “three-hundreds; one-ten; two plus three-tens; five.” Thus, Japanese students do not need to do the extra step of translating the words into numbers because the place value ideas are embedded directly into the number words.

In addition to the irregular nature of English number names, there are many other concepts and notations that ELLs have to learn. For example, many ELLs in the U.S. are familiar with the metric system but are new to pints, pounds, feet, quarts, and ounces. Other students come from school systems that emphasize calculations, not communicating mathematical thinking. Some students come from places where decimal numbers are represented with commas instead of periods, or where large numbers are written using periods instead of commas. The challenges for ELLs can be tremendous, as they are trying to learn (or perhaps relearn) mathematics in an environment that uses a language they have not yet mastered. By becoming more aware of the unique characteristics of the language of mathematics, teachers can be more strategic and deliberate when planning and implementing instruction.

This article is organized in two sections — the first of which discusses the new Common Core State Standards (CCSS) for Mathematics. These standards, being implemented throughout the U.S., provide a set of uniform benchmarks for the teaching and learning of mathematics. Second, we explore the unique features of the language of mathematics, including vocabulary, symbolic representations, grammatical structures, and discourse features. This section analyzes the language of mathematics and provides many instructional suggestions for all students, but particularly ELLs.

The Common Core State Standards
Mathematics education is at a critical moment. Most U.S. states have adopted the CCSS, a set of standards that define grade-level expectations intended to support more students in achieving post-secondary success. The CCSS were developed using research and practice evidence with the goal of reducing the number of standards, making clearer the description of outcomes, and raising the level of expectations.

The CCSS emphasize three aspects: coherence (thinking across grades and linking to major topics), rigor (pursuing conceptual understanding, procedural skill and fluency, and application), and focus (narrowing the scope of content and deepening understanding). Accompanying the content standards are the Standards for Mathematical Practice, which describe ways students come to interact with content as they grow in mathematical maturity and expertise throughout their schooling (CCSS, 2010). These practices, listed below, work in tandem with the mathematics content standards in supporting instruction. The eight Mathematical Practices describe essential mathematical habits of mind and action that can guide K-12 curriculum, pedagogy, and assessment.

1. Make sense of problems, and persevere in solving them.
2. Reason abstractly and quantitatively.
3. Construct viable arguments, and critique the reasoning of others.
4. Model with mathematics.
5. Use appropriate tools strategically.
6. Attend to precision.
7. Look for and make use of structure.
8. Look for and express regularity in repeated reasoning.

The language of mathematics plays a pivotal role in the implementation of each of the recommended mathematical practices. For example, “attend to precision” focuses on precise communication in speech, written symbols, and other representations (e.g., graphs and diagrams). The term precision, however, can be interpreted differently, particularly in reference to ELLs. Judit Moschivitz (2013) cautions teachers to consider when and how to focus on precision. She reminds us that “precise claims can be expressed in imperfect language and that attending to precision at the individual word meaning level will get in the way of students’ expressing their emerging mathematical ideas” (p. ix). Precision in relation to the language of mathematics should not be reduced to individual word meaning. Teaching the ten important words for the topic will not help students understand mathematical concepts and develop critical thinking skills; giving students voice to reason abstractly and construct viable arguments will.

Using and accessing the language of mathematics while “attending to precision” requires educators to select their level of precision strategically. Ways of helping students successfully develop precise and clear communication include: (1) when pedagogically appropriate, avoid words that might aid mathematical precision, but that also might hinder comprehension and obscure meanings; (2) allow students to use their native languages to enhance communication; (3) encourage students to express complex thought processes using linguistic simplicity; and (4) help students develop metalinguistic awareness — that is, the ability to consciously reflect on the nature of language — the language of mathematics (for suggestions to promote academic language development in relation to the eight Standards for Mathematical Practice, see, for example, Gottlieb & Ernst-Slavit, 2013). Learning the academic language needed to succeed in the mathematics classroom is indeed a complex process that involves care, multiple modes of communication, and intentionality when selecting representations.

The Language of Mathematics
The language of mathematics is the system used to communicate mathematical ideas. This language consists of a layer of everyday language, technical terms and symbols, grammatical conventions unique to mathematical discourse, and specific types of discourse or chunks of language.

These different features of the language of mathematics can make it difficult for ELLs to draw meaning. In the sections below, we describe characteristics of the academic language needed in mathematics classrooms. More specifically, we analyze important aspects related to letter conventions, symbols, vocabulary, grammatical structures, and discourse that characterize current mathematics teaching and learning in the U.S.

Conventions
Letters in mathematics can have special uses. Unfortunately, special conventions related to letter use are sometimes glossed over (see table below). Making these conventions explicit can support all students, including ELLs. 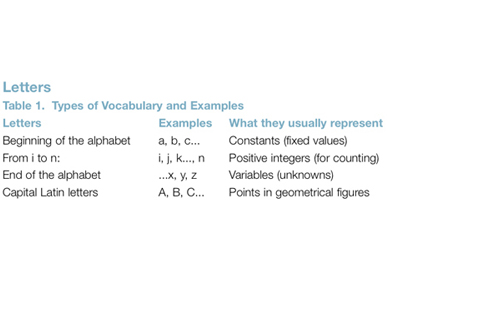 Symbols
Mathematics uses symbols to represent concepts, functions, values, operations, or structures (e.g., sequences). Most ideas and concepts are eventually illustrated with the use of symbols. Without proper symbols, it would be very difficult to express procedures or relations. Imagine trying to solve an equation using words — it would take several paragraphs. However, words must accompany the introduction and use of mathematical symbols given that their purpose is to consolidate meaning. Making the general and specific role of symbols explicit can support ELLs.

• There are the 10 digits: 0,1,2,…9
• There are symbols for operations: + – x / √ ±
• There are symbols that “stand in” for values: x, y, …
• There are many special symbols: = ≠ ≈ ∞ < ≤, ... Vocabulary
Many common English words have unique meanings in mathematics (e.g., plane, face, bring down, net, negative, column, table) and can be a source of confusion for ELLs. The example below was given by Moschkovich (2008) to highlight the importance of helping students learn the meaning of everyday words like “find” in the context of mathematics. The student did not know what it meant to “find x” within this mathematical context.

The math register includes diverse words, phrases, and expressions that can be grouped into four categories: everyday vocabulary, general vocabulary, specialized vocabulary, and technical vocabulary. Definitions and examples for each type of vocabulary are presented below in Table 2. Balancing rigor and comprehension implies careful attention to the kinds of words used during mathematics instruction. 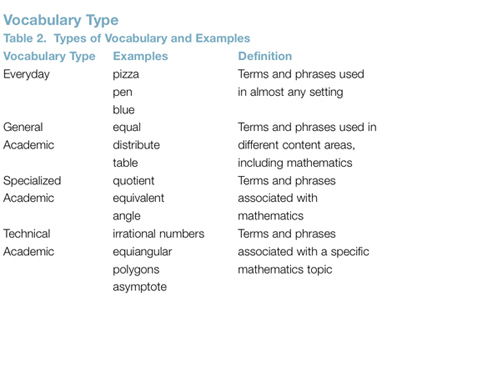 Grammatical Features
At the sentence level, there are language patterns and grammatical structures specific to mathematics. ELLs can be misled when they attempt to read and write mathematical sentences in the same way they read and write everyday written text. For example, many students try to literally translate a mathematical concept expressed in words into a concept expressed in symbols. Dale and Cuevas (1992) demonstrated this type of linear, one-to-one translation with the algebraic phrase “the number a is five less than the number b.” They found students tended to represent this phrase with the mathematical expression a = 5 – b, when it should be a = b – 5.

Other language features also present difficulties. These include the use of logical connectors (e.g., consequently, however) that in everyday language indicate a logical relationship between parts of a text. In mathematics, they signal similarity or contradiction. Along the same lines, the use of comparative structures (e.g., greater/less than, n times as much as) and prepositions (e.g., the temperature fell by twelve degrees, from twelve degrees, to twelve degrees) pose challenges for students trying to learn English and mathematics at the same time.

Discourse
Egbert and Ernst-Slavit (2010) discuss two common areas of students’ mathematical difficulty at the discourse level: (1) density of mathematics textbooks, and (2) word problems. One reason why most students, including native English speakers, struggle when reading mathematics texts is the vast number of concepts packed into somewhat brief chunks of text. When compared to other content areas, mathematics texts present more concepts per word, sentence, and paragraph.

Word problems can be challenging, since students have to be able to decode words to understand the context of the problem, identify the question that needs to be addressed, and finally create an equation or other mathematical representation and solve the problem. For example, consider this word problem found in a well-used fifth grade mathematics textbook:
There are four windows in the attic and each window has eight panes of glass. One friend cleans every third pane. Two of you clean the rest. Who cleans the least number of panes? (Houghton Mifflin’s Math Central, 2001, p. 241).

As we read this problem with our son we wondered: Will the friend start on pane one of window one or on pane three of window one? Will he or she then move to window two or continue in window one? Is the comparison among the three friends or between the “one friend” and the “two of you”? What is a “pane”? To us, the directions appeared unclear and the choice of terms confusing. For ELLs, many word problems are linguistically daunting, making the mathematics appear quite difficult.

Both Gisela Ernst-Slavit, PhD, and David Slavit, PhD, are professors in the Department of Teaching and Learning at Washington State University, Vancouver. Ernst-Slavit is a professor of education and ELL. She teaches courses in sociolinguistics, literacy, and biliteracy, research on second language teaching and learning, ESL methods, and critical issues in the education of Latino students. She is a past president of WAESOL (Washington State English to Speakers of Other Languages). David Slavit is also a professor of mathematics who has recently transformed his primary professional focus into analyzing teacher development at the classroom, building, and district levels.