Learning Outside the Box 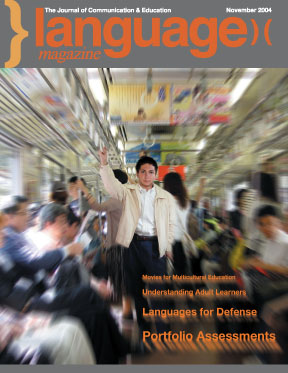 As we enter the final phase of the U.S. elections, it has become apparent that the next president will be chosen on the basis of foreign policy. This is a reflection of the undeniable fact that the world has become interdependent and no nation can exist in isolation. Once we accept this fact, there should be no argument against the compulsory teaching of foreign languages in all of our schools.

Over the course of the presidential campaign, foreign policy issues have constantly come to the forefront, even when they were supposed to have been specifically excluded from the debate. Of course, the occupation of Iraq dominates the agenda, but the wider issue of international cooperation impacts both on the conflict in Iraq and the war on terrorism. There is a general acceptance that international cooperation is essential to the security and prosperity of the nation, but little effort is being made to ensure that the next generation of Americans has the tools to interact on a global level.

In order to negotiate efficiently on a global level, be it in a political context, in business or in any other capacity, understanding of your counterparts’ culture is a prerequisite. Foreign language study is key to the appreciation of different cultures, so we need to do all we can to promote it.

Later this month, the American Council for the Teaching of Foreign Languages (ACTFL) will be launching the 2005: Year of Languages initiative at its annual conference in Chicago. The objective of The Year of Languages is to advance the concept that every American should develop proficiency not only in English, but in other languages as well.

Events will take place in various settings, including elementary and secondary schools and post-secondary institutions as well as at the local, state and national levels across America.

This is a great opportunity to focus America’s attention on the academic, social and economic benefits of studying other languages and cultures from around the world. The initiative will seek to positively influence the full range of language programs in U.S. schools and communities and the students these programs are designed to serve. Hopefully, the campaign plan will capture the attention and interest of all Americans with the involvement and assistance of teachers, administrators, state, local and federal legislators and government officials, businesses and, perhaps most important, parents.

Let’s do all we can to ensure that this initiative succeeds and builds the foundation for greater global understanding.