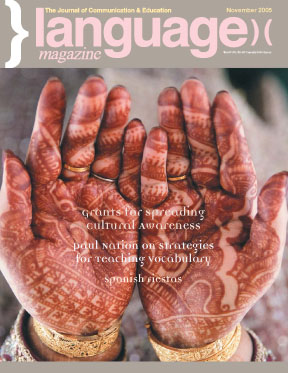 As we approach the end of the first Year of Languages in the U.S., it is time to demand that this country have a cohesive plan to ensure that our children leave school with at least a basic, working knowledge of a second language. In this era of instant, global communication, language skills are not only a prerequisite for economic success, they are essential to global cooper­ation, and thus an investment in security.

Of course, education is the responsibility of state governments, but incentives at the federal level can provide the impetus for nationwide implementation. In the same way that the No Child Left Behind Act uses federal subsidies to set the educational agenda, a less intrusive incentive scheme could be designed to encourage states to make language learning a priority.

In her recent statement of support for International Education Week, Secretary of Education Margaret Spellings seems to see the importance of language education, “We are constantly reminded that we live in a borderless world in an age where information and news are available twenty-four hours a day, seven days a week. The world is indeed interconnected, and what happens in any one country can be instantly transmitted worldwide… International Education Week 2005 is a time to celebrate international education and exchange. It is also a time to reflect about America’s place in the world and to assess whether we are preparing our stu­dents for success in a global environment.”

Some states are taking steps forward without federal pressure, such as Kentucky, where a proposal is being considered which would require all high school students to show proficiency in a foreign language for graduation (see page 13).

In New Jersey, gubernatorial candidate Senator Jon Corzine has made language learning a priority of his education policy with the following statement in a recent speech, “In a global economy, our students need to be prepared with world languages and culture… We need to redouble our commit­ment to teaching foreign language to children of all ages starting in elementary schools.”

However, the reality is that English mother-tongue children are not flocking to learn second languages and children who speak a language other than English at home are not being encouraged to retain it.

The Year of Languages initiative is a start in the right direction, but to produce tangible results the campaign requires a broad base of support, and, although the American Council on the Teaching of Foreign Languages (ACTFL) has done what it can to further the cause, it needs the support of other organizations. Obvious partners are supporters of bilingual education and heritage languages, but the support of commercial entities, such as chambers of commerce and international corporations should also be enlisted.

Eighty percent of European school children are graduating with second language skills. We need to work together to make sure that the next generation of Americans is not left behind.