What Next? Burning Books? 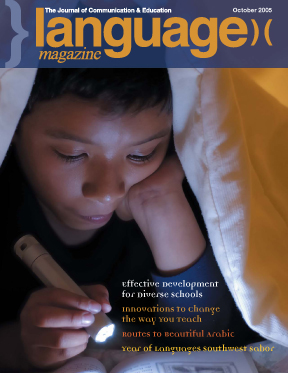 It is almost a month since the U.S. Department of Education chose not to release a report commissioned three years ago on the effectiveness of bilingual education (see Language Magazine, 9/05, p.10). Educators and the general public have a right to know what the taxpayer-funded research found, so that they can make better informed decisions about a heavily-politicized subject.

The Department’s argument that they “chose not to publish the report because eight distinguished peer reviewers found the report to have major problems” only contributes to a perception that the Bush administration withholds information which supports opposing views while making a song and dance about reports that support their positions.

Although the Administration has not expressed an opinion on the subject of bilingual education, it seems natural to presume that their position is influenced by conservative activists who think public schools should abandon bilingual instruction in favor of English immersion. Whatever their views on the subject, they do not have the right to suppress publicly-funded research. Surely, we all want the same thing — to find out how best to help children who enter public schools without a working knowledge of the English language. The government should be interested in sharing with educators the findings of the nonpartisan group of professors who studied bilingual education. They need all the information they can get on the subject and they are in the best position to determine whether or not the report is of value.

Bringing the information into the public arena by publishing the report is the only acceptable course of action, but the government is all too aware that its release will generate media coverage, whereas relegating the research to a book that may or may not get published will ensure that the mass media ignore it. And, as long as the mass media ignore it, the administration can ignore it if it does not agree with it, even if it does offer some assistance in the education of our children. Such action totally undermines the administration’s credibility on education, where it is always claiming the high ground.

It was to the credit of President Bush when he authorized a study into bilingual education, even if the purpose of the study was only to examine the existing literature and data on the subject to determine what was effective.

We can only assume that the final report agrees with the interim findings that “children’s early literacy skills climbed at a faster rate in bilingual classrooms,” which panelist Robert Slavin wanted to publish over a year ago. The Education Department refused and he resigned, probably realizing then that his work would be in vain.
This is our report. We paid for it. We are capable of determining its value.

Only One Language for America?
Domenico Maceri questions the rationale behind making English America’s official language