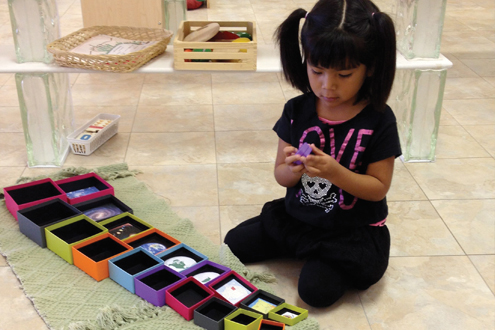 All 19 Indian pueblos of New Mexico have an understanding that we are at a critical point in our long history — that critical point being the difference between language loss and language maintenance and revitalization. Many Pueblos still feel it is the responsibility of the family to give language, and in families where language remains strong, this is still being done. With this understanding and the desire to support families in maintaining their children’s language in the crucial early childhood years, the Keres Children’s Learning Center (KCLC) opened at Cochiti Pueblo in September 2012 after six years of preparation: researching related endeavors, developing the model, shoring up financial support, and laying the groundwork in the community.

Co-founded by Trisha Moquino and Olivia Coriz, the school begins as a preschool, serving children from ages two and a half to four. The pedagogical approach is Montessori, and the language of instruction is Keres, the unwritten language of the Cochiti people. As the children matriculate to ages six and older, the school will evolve into a dual-language Montessori school, and an English language teacher will join the team.

The school was created to address the critical language loss being experienced at Cochiti Pueblo and to give Cochiti parents the opportunity to educate their children in a manner that is in line with traditional practices and where they know their children will hear Keres in an immersion setting. Parents and families are supported through weekly evening seminars in which we discuss their responsibility to pass on the Keres language. In passing on the language, values, beliefs, and a worldview like none other are also transferred to the next generation.

At KCLC, children receive lessons that are culturally appropriate as well as lessons that will prepare them for mainstream education. KCLC emphasizes creating self-motivated learners through meaningful everyday lessons and activities, such as washing dishes, cleaning windows, setting up snacks for classmates, grace and courtesy, caring for the self, and learning the foundational skills for future literacy, numeracy, and the humanities.

The ultimate goal is to have our students be truly bilingual. With families and KCLC working together to reclaim the children’s education, we put our faith and our hearts into this effort. KCLC is independently funded. While it is a struggle to raise the necessary money, it gives KCLC freedom from the many early-childhood English-oriented policies that would interfere with its primary purpose. KCLC is grateful to everyone who has supported and contributed to our efforts.

Trisha Moquino and Olivia Coriz are co-founders of KCLC, and Mara Matteson is a teacher at the school. This article originally appeared in Soleado, published by Dual Language Education of New Mexico — www.dlenm.org. For more articles from Soleado, please visit www.soleado.dlenm.org.

The languages spoken by the Pueblo people of Acoma, Cochiti, Laguna, San Felipe, Santa Ana, Santo Domingo, and Zia Pueblos are so closely related that linguists usually consider them dialects of a single language, known as Keres or Keresan. This Keresan language is not related at all to the Kiowa-Tanoan languages spoken by most of the other Pueblo people of New Mexico. Keres is spoken by nearly 11,000 people in the American Southwest today.

There is some disagreement among the Keres people as to whether Keres should be a written language or not. Some Pueblo elders feel that their languages should be preserved by oral traditions alone. However, many Keres speakers have decided that literacy is important for passing the language on to children. The Keres-speaking pueblos have developed their own orthography for their language, and today there are programs teaching Pueblo children to read and write in five of the seven Keres-speaking pueblos.