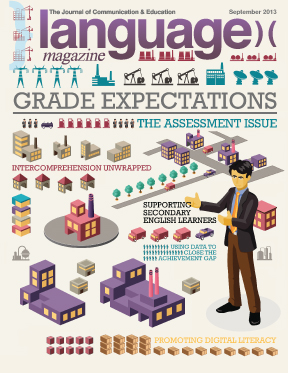 Once again, a new study (News, page 9) points to the efficacy of bilingual education, adding to the ever-growing body of evidence supporting the premise that the learning and acquisition of a second language enhances all cognitive processes. However, the current focus on the Common Core State Standards in the U.S. is arousing fears that world language programs, along with other supposedly ancillary subjects, will be neglected in the pursuit of better results in the all-important Common Core assessments. Instead of competing for timetable slots with core subjects, these language programs might be exactly what students need to help them excel in English, math, and science.

Our practice of dividing curriculum into stand-alone subjects has long had its critics, and interdisciplinary teaching is increasingly regarded as a dynamic and viable alternative. Indeed, amongst educators, one of the most popular features of the new Common Core literacy standards is the prospect of interdisciplinary thematic units. The introduction of nonfiction into the language arts classroom and the requirement that all teachers be responsible for the acquisition of academic vocabulary are steps in the right direction. However, even though it’s hardly a new breakthrough, only more imaginative administrators will see the interconnectivity between second-language acquisition and not only first-language proficiency but improved understanding across the curriculum.

For centuries, Latin was taught to school kids, the majority of whom start off by questioning the point of learning a “dead” language only to later appreciate the insight it has given them. Maybe this explains the recent resurgence of interest in Latin. Learning any second language helps students better understand and appreciate English. Learning a Latin-based Romance language also leads to a better understanding of English grammar and provides a great springboard for acquiring the academic English vocabulary fundamental to the Common Core Standards. The Latin roots on which much of formal and academic English is based are much more apparent in everyday Spanish, French, or Italian. Awareness of prefixes, suffixes, and stems multiplies a student’s capacity to decipher a new technical term or other complex vocabulary. There can be little doubt that knowledge of these languages will lead to faster acquisition of English academic vocabulary.

Understanding increases when we look at subjects from different perspectives. The same is true of language and culture. Step­ping back and looking at our own languages and cultures from the perspective of a language learner (no matter what language) enables us to codify our mother tongue so that we can use it more effectively, helps us understand the challenges faced by other language learners (notably English learners), and expands our capacity for cultural understanding — so that we not only are able to better appreciate other cultures but can even better enjoy our own from a new perspective.

The benefits of second-language acquisition in our global society are strikingly obvious in their own right. But no discipline exists within a vacuum and, when the consequential benefits to other subjects are taken into account, the argument in favor of making language learning a requisite part of curriculum in elementary and high school is overwhelming, especially now in the Common Core era.

Making Conversation Stick
Laurie A. Massery offers practical tips to make the most out of talking in any language

Last Writes
Richard Lederer takes us to the home of rhetoric