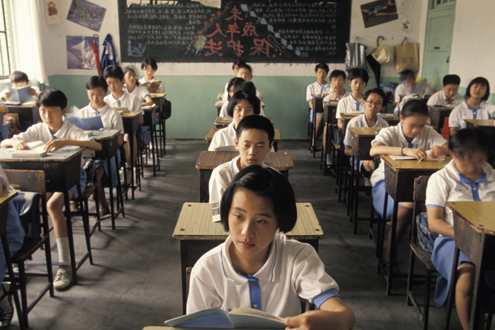 Why It Matters
In an increasingly globalized world, the U.S. is at an ever-increasing disadvantage due to the lack of foreign language skills among Americans.

Other than heritage-language speakers, it is estimated that only between one in eight and one in four Americans have the foreign language skills necessary to hold a conversation in a language other than English. According to the Modern Language Association, enrollment in a course in a language other than English at the postsecondary level stands at 8%, as opposed to 16% in 1960 — the same time frame in which globalization has increased.

Among executives in international business, the typical American executive may speak one foreign language at most, while European and other international executives routinely speak multiple languages at the business-proficient level. On an individual level, a monolingual English-speaking American runs the risk of being passed over for a promotion, or for a new job, in favor of an international applicant with the same professional skills but with the added advantage of knowledge of one or more relevant foreign languages. While exports are widely acknowledged to be an essential element of a sustainable economic recovery, companies struggle to find employees with the needed language skills.

As a consequence of the events of 9/11, the National Security Language Initiative was launched in 2006, and both the Federal government and the military have developed plans to increase language and global skills among their departments and branches respectively. However, many of these plans have taken time to develop, only to lose funding during the economic recession and subsequent weak economic recovery. As recently as 2012, congressional hearings were held to examine the language deficit at the federal level.

Challenges to Foreign Languages in the U.S.
Challenges to the development of foreign language skills among English-speaking Americans include the sense that English is the global lingua franca. While it is true that many internationals may speak English, it is estimated that 75% of the world’s population does not speak English. Those who do may have varying levels of skill and willingness to use English.
The lack of day-to-day exposure to other languages is another challenge, as most Americans would need to travel a significant distance to completely immerse themselves in a society where English is not the local or official language. Many Americans would even have to travel a significant distance to experience a large community of foreign-language speakers within the U.S. In many parts of the world, multiple languages co-exist, or travel to an area where another language is the predominant or official language is a matter of a short trip.
Even if an American has the desire to learn another language, challenges remain. Typically, foreign language instruction begins relatively late in school, at a time when other courses, social obligations, and even jobs compete for a student’s limited time and attention.
As has already been mentioned, at the college level, only 8% of students are enrolled in a foreign language course, and this relatively small enrollment is heavily concentrated in elementary levels and in the Spanish language.

Outside of a traditional school setting, challenges exist, as learning another language requires time and energy, both of which are typically in relatively short supply to adults. In addition, the adult learner also needs to select and determine the materials to be used in language learning and to resist discouragement as the inevitable plateaus in learning progress are reached.

Perhaps the most subtle and insidious challenge is a pervasive lack of interest in other languages and cultures among many Americans, as this interest, or intrinsic motivation, is the most effective driver of successful foreign language learning.

What We Can Do
As individual citizens, we can advocate for foreign language education opportunities for our parents, ourselves, and our children within our schools and communities. We can write to our government representatives at the local, state, and national levels. We can join groups to advocate for foreign languages, or even run for local office. On a personal level, we can choose to learn new languages and encourage our friends and family members to do so as well.
Educational institutions at all levels have the opportunity to offer more foreign language courses and to enhance classroom learning with experiential learning, ranging from the recruitment of local native speakers to the establishment of language living-learning environments on campus or during summer or short-term courses at all levels. Entertainment and social media, as well as other relevant technologies, can make learning more effective and more accessible.

Business can certainly support foreign language learning among employees through on-site classes or through partnerships with local educational institutions to support either international ventures or business within local multilingual and multicultural communities. Compensation and/or other rewards should be offered to those who develop the desired foreign language skills.

For decades, leaders in government, education, and business have confirmed the need for the development of foreign language skills in order for Americans not only to be secure and competitive, but also to live richer, more fulfilling lives.
Importantly, they have also provided a significant body of literature on what policies, procedures, and action steps are needed to achieve this paradigm shift. The following are just a few of the most timely and relevant examples.

• Senator Daniel Akaka held a hearing entitled “A National Security Crisis: Foreign Language Capabilities in the Federal Government” on May 21, 2012.

• The 2007 MLA report, Foreign Languages and Higher Education: New Structures for a Changed World pointed the way to a renewed approach to foreign language education.

• In terms of education for business, the Modern Language Journal offered a special issue on Languages for Specific Purposes in the U.S.in a Global Context in January 2012. This followed two research reports published by the Apollo Research Institute (University of Phoenix): The Great Divide: Worker and Employer Perspectives of Current and Future Workforce Demands, in 2011, followed by the even more language-specific Current and Future Language Demands in the Workplace: Proficiencies and Gaps, in 2012.

In order to increase the desire among Americans to learn other languages, government, education, and business will need to work together to develop the language-learning mindset among Americans through language policy, increased and varied foreign language course offerings, and compensation and career opportunities respectively.

A strategic marketing plan, developed in concert by government, education, and business, can achieve results similar to those achieved in the European Union and other parts of the world.
As Senator Paul Simon wrote in 1980 in The Tongue-Tied American, we can either be tongue-tied or fluent.

Kathleen Stein-Smith, PhD, associate university librarian and adjunct faculty at Fairleigh Dickinson University in New Jersey, is the author of The U.S. Foreign Language Deficit and Our Economic and National Security: A Bibliographic Essay on the U.S. Language Paradox, Edwin Mellen Press, 2013.