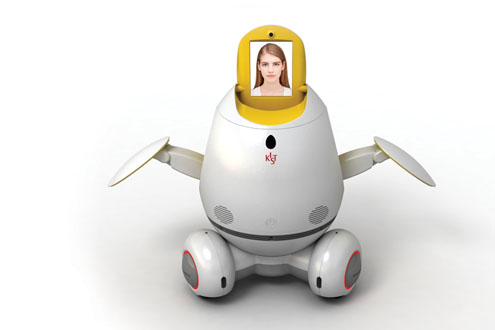 Ann Babe looks at a new reality in language learning

After years of development and testing, South Korea is set to introduce its latest English-instruction innovation, a robot teacher named Engkey, to the global market.

With a series of pilot programs wrapping in late March to largely positive reviews, the robot’s creators at the Korea Institute of Science and Technology believe Engkey is now ready to begin work in English classrooms around the world.

“[At] this time, we’re focusing on commercialization of the robot Engkey,” Dr. Mun-Sang Kim, the director of the KIST Center for Intelligent Robots, said, adding the institute plans to manufacture and sell more than 100 robots in Korea and abroad in the next three years.

Though Engkey currently costs nearly $28,000 per unit, KIST is confident the robot will prove commercially successful in the near future. According to Kim, the price will drop as more robots are produced, eventually reaching less than $10,000.

“We hope the robot Engkey [will] present and lead a new way of teaching English,” Kim said.

Engkey, short for English Jockey, is a 3.3-foot tall, egg-shaped machine that comes in two models — an avatar and an autonomous unit. The avatar, or telepresence type, is operated remotely by a teacher in the Philippines, whose voice, facial expressions and body movements are all communicated through Engkey.

The autonomous type teaches on its own by leading students through a preprogrammed curriculum, including songs, role-play and pronunciation exercises. It employs user tracking and voice recognition to interact with students and evaluate their performance.

As part of the recently completed pilot programs, both types of Engkey were tested at 23 elementary schools around southeastern Korea. Daegu City, home to 21 of the pilot schools, reported high satisfaction levels from both parents and students, according to the Daegu Metropolitan Office of Education.

But it’s this non-human interaction that has some language instructors concerned. Many are doubtful Engkey will be able to prepare students for success outside the classroom.

“Both the telepresence and the autonomous robots deprive the students of the sense of intimacy and authenticity that a human instructor provides,” Valley said.

While Engkey proponents admit the robots should not replace humans, they do believe they will benefit remote and rural schools that struggle to recruit native English teachers.

Lee said he’s looking forward to exploring the possibilities of Engkey, but added “when it comes to teaching language, the human being is best.”

While that may be true, Engkey will never ask for a pay raise, or improved benefits, or appreciate the gift of an apple.

Ann Babe is an ESL teacher and writer who currently lives in South Korea. Photo courtesy of Center for Intelligent Robots, KIST