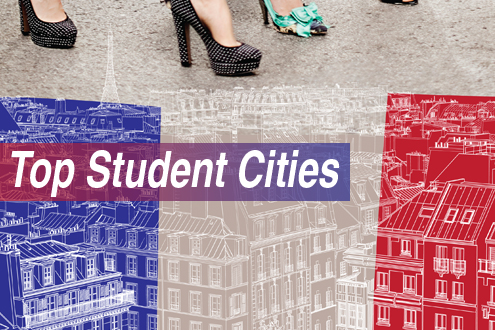 Paris has been named the world’s best student city, ahead of London and Boston. Its victory is not only a result of its street life and charm, or even the quality of programs on offer; diversity and the high standard of teaching, low fees and the quality of student life in France were also important.

The French capital triumphed in the QS survey ranking world student cities, the first of its kind, produced by British research company Quacquarelli Symonds, which is famous for its university and MBA rankings. In the QS Best Student Cities 2012 survey, Paris scored 421 points, ahead of London (405 points), Boston (399 points), Melbourne (398 points), and Vienna (389 points). Other Francophone cities fared well with Montréal coming in 10th, Lyon 14th, and Toulouse 45th.
Unlike London and Boston, Paris does not have a university ranked in the global top 30, so it may come as a surprise to some that it ranks as the top city in the world for international students. However, Paris has 16 institutions in the QS World University Rankings, comfortably more than any other city in the world.

The cost of education in French state universities also played a significant role. Tuition fees for the 2011-12 academic year averaged $225 for a Bachelor’s degree and $315 for a Master’s. On top of this, there is an extensive system of public funding. Grants are more generous and are also available to students from middle-class families. The social security system and top-up health insurance schemes for students offer medical coverage at very affordable prices.

Then, take into account that Paris is in the heart of Europe, so Parisian graduates are targeted by a vast range of employers throughout the continent; and perhaps most importantly for students, all of this takes place in one of the most historic, culturally vital and beautiful cities imaginable. There’s a reason why Paris is the most visited city in the world.

Elite Parisian universities such as ENS Paris, École Polytechnique, Sciences Po and the Sorbonne have produced some of the most important philosophers, theorists, scientists, and mathematicians of the last 100 years, not to mention seminal movements in literature, film and art. Students often enjoy extensive access to leading academics, with small class sizes and intensive teaching belying the universities’ low tuition fees. Paris is frequently rated as one of the most livable cities in Europe, and it scores highly in the quality of living indicator. Perhaps the only real drawback for students is that socializing in Paris can be expensive — but it’s also one of the best cities in the world for living the budget student life.

The new ranking is based on a different set of criteria from those usually used. Whilst the normal rankings are based primarily on academic criteria, the new survey also takes into account the size of the student population (domestic and foreign), quality of life, employers’ views of graduates, fees and student life (or “accessibility”).

The quality of student life element works in favor of French universities, which have taken numerous steps (including information meetings, putting new students in touch with fellow students and tutors, mentoring schemes, etc.) to improve the way young people are welcomed, supervised and monitored. Students have reasonably priced university canteens available and more of them have access to university accommodation than in other countries. The Centres régionaux des œuvres universitaires et scolaires (CROUS), which deal with student catering and accommodation and provide bursaries, and Centres d’information et de documentation jeunesse (CIDJ — information and documentation centres) are unique networks which provide support in areas such as training, employment and housing. The high level of amenities — particularly digital resources — also scores well in the ranking.

Improvements in the physical environment are particularly visible in Paris where, according to the city’s chief education officer, Patrick Gérard, €200 million have been invested in university libraries and the CROUS. “We have also just undertaken some major work at the Assas campus and in the university canteen in Mabillon; our next project is the library at the Sorbonne,” explains Patrick Gérard. The French capital also boasts numerous sporting facilities and, of course, a wide array of high-quality cultural amenities, including concerts, exhibitions in major museums and art galleries, plays in historic and avant-garde theatres, two opera houses and a network of art and experimental cinemas unequalled anywhere in the world… all of which are available at concessionary rates for students.

Parisian students also have the edge when it comes to employers. The French capital and the surrounding region benefit from a dense network of innovative companies with which the universities have formed partnerships.

2/ London
With Imperial College and University College London ranked among the world’s top ten universities, alongside London School of Economics, which makes the top five for social sciences, perhaps only Boston can rival London’s academic credentials. World-class facilities such as the British Library, with one of the most extensive and important collections of books and manuscripts in the world, make London a magnet for students and researchers from all over the planet. Yet London also offers far more to students as a city: one of the world’s great centers of culture and creativity, famed for its nightlife and diversity, there aren’t many things that you could hanker for as a student that aren’t on offer in abundance in London.

London is one of the world’s most important financial centers, so for corporate-minded graduates it is a land of opportunity. Yet it is also one of the most important cities for media and the arts, as well as a host of other industries. London isn’t cheap by any standards — for international students, tuition fees at the city’s top universities approach those charged in the U.S., while home and European Union undergraduate students will be affected by major fee increases implemented in 2012. And that’s before you even start thinking about rent and living costs. Yet for many, the concentration of world-class universities and facilities, the professional and social opportunities, and a mind-boggling cultural confluence that mixes the corporate and the alternative, the historical and the cutting-edge, still makes studying in London worth every penny.

3/ Boston
Boston’s two highest-ranked institutions are actually in neighboring Cambridge, Massachusetts, part of the Greater Boston area but not the city proper. But one of the things that make studying at Harvard or MIT so appealing — aside from the fact that they’re two of the greatest universities in the world — is that Boston is on your doorstep. One of the most historic cities in the U.S., Boston combines the hustle and bustle of a major metropolis, and a happening arts, political and cultural scene, with an abundance of parks and the stunning fall colors for which New England is famous.

Boston’s cluster of historic universities has earned it the additional nickname, “The Athens of America.” With Harvard and MIT ranked numbers two and three in the world and Boston University also in the global top 100, Boston/Cambridge scores predictably highly in the ranking indicator, but also ranks well for student mix, quality of living, and employer activity. The only major drawback is cost — tuition fees at Harvard and MIT are nearly $50,000 per year, although in reality generous financial aid packages mean that many students pay significantly less.