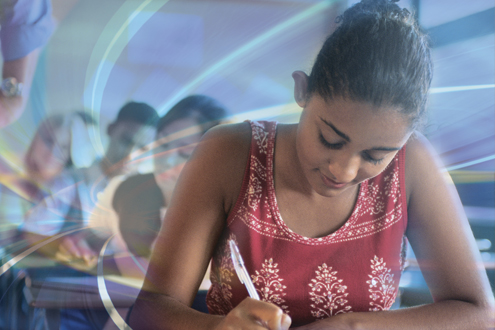 If you were a surfer, the Common Core State Standards and the Next Generation Science Standards would comprise something like an enormous wave generated by a perfect storm of conditions. The education policy environment at the national level combines decades of effort at standards-based reform, attempts to link academic content development with second language development in English, and political gridlock over the reauthorization of the Elementary and Secondary Education Act. Whether you like it or not, here comes the wave, and the choice that faces you and your school and district colleagues is how to ride it.

The Understanding Language initiative, co-led by Kenji Hakuta of Stanford University and Maria Santos of Oakland Unified School District, has been investigating the particular demands on language use that are inherent in the new standards, with serious implications for ELLs. In this article, we will address what the new standards might mean for teachers of English Language Learners — both teachers of English Language Development (or English as a Second Language) as well as the many teachers of academic content, such as literature, history, science, or math, who teach ELLs. We will also address what this new wave would mean for school and district leaders and how educators can best capitalize on it.

History and Policy Context
The new standards come at a particular moment in time during this nation’s series of efforts at standards-based reform, dating back to the 1980s with the release of A Nation at Risk in 1983. This seminal report raised national attention to low student achievement and generated reform energy that culminated in the two major pieces of Clinton-era legislation — Goals 2000 and the reauthorization of the Elementary and Secondary Education Act, named the Improving America’s Schools Act of 1994. The main theory of action in these policy moves was that the creation of high standards for all students triggers systemic changes that align all parts of an otherwise distributed and poorly organized web of state and local systems.
In the reauthorization that is commonly known as the No Child Left Behind Act of 2001, standardized tests aligned to academic content standards were given teeth through federal accountability requirements — including reducing the achievement gap for ELLs. The law also required states to create tests for English language proficiency and created state and district accountability for attainment of proficiency benchmarks. Importantly, it required the language proficiency standards to be aligned with the academic standards — at least in theory, since no one could say how this could be done!
These developments created conditions that set the stage for the Common Core — systems were now paying more attention to the academic and English language attainment and progress of ELLs, largely caused by the accountability requirements and conditions, as well as to the intersection of content and language — all at the state level.1

Current congressional gridlock now becomes part of the story. Ask almost any educator what they think about NCLB, and on top of their list is the unrealistic nature of the requirement about proficiency attainment and gap reduction between subgroups of students over the life of the law. I am fairly certain that no legislator truly believed this to be a realistic goal when they voted for the law in 2001 and that they justified it by saying that it was aspirational and that the law would be reauthorized and the goals recalibrated. Well, twelve years later, it is highly unlikely that reauthorization will be taken up seriously in the new Congress.

In anticipation of congressional inaction and in response to pressure from districts and states for relief from the corrective actions triggered by NCLB, the Obama administration in 2011 announced the option for states to apply for a waiver from some provisions of the law based on state agreement to implement reforms related to some of the administration’s priorities, including achieving college- and career-ready expectations (read: the Common Core), developing differentiated recognition, accountability, and support systems, and systems support for effective instruction and leadership.2 An important component in the administration’s guidelines was in the following sentence: “An SEA must also support English Learners in reaching such standards by committing to adopt English language proficiency (ELP) standards that correspond to its college- and career-ready standards and that reflect the academic language skills necessary to access and meet the new college- and career-ready standards, and committing to develop and administer aligned ELP assessments” (emphasis mine).
While only a handful of policy wonks initially saw the significance of this sentence, on which state school chiefs from many states signed off, what it means is clear: state English language proficiency tests, which are not part of the Common Core State Standards, must nevertheless all be aligned to state ELP standards that “correspond” to the Common Core. The intended system is an aggregate of the content and language standards, united by the Common Core.

With 45 states having adopted the Common Core, and most states having received waivers from NCLB under these conditions (34 states plus the District of Columbia, at last count, and most of the remainder at some stage in the application process), this issue of how to address English language proficiency and the Common Core has emerged from a sideshow to center stage of state-level policy in the majority of states in the nation.

Understanding Language
The Understanding Language initiative is a collaboration of educational experts and leaders in policy and practice who have a shared interest in addressing the challenges and opportunities created by the CCSS and the Next Generation Science Standards, with a primary emphasis on the impact on ELLs. Through its website (http://ell.stanford.edu) and public presentations, the initiative has released papers, policy statements, and instructional resources to actively engage key stakeholders and district and state leaders on these issues.

The key argument of Understanding Language is that the new content standards have the following characteristics: (1) they raise the bar for content learning and highlight the role of construct-relevant disciplinary language, and (2) they define language not just in cognitive terms, but in terms of teacher-student and student-student discourse. The ELA and literacy standards call for students to evaluate complex texts, construct effective arguments, and communicate intricate information. The math standards call for students to construct arguments, make conjectures, build statements that explore the truth of their conjectures, and understand the reasoning of others. The science standards (still in draft form) call for students to engage in peer review of scientific explanations and in the construction of effective arguments.
Collectively, these standards call for instruction that supports student engagement in productive and oral written group work with peers and with teachers. Students are expected to have opportunities to explain and demonstrate their knowledge using emerging complex language and other communicative strategies in different settings, and to have access to complex written text and corresponding instructional and peer supports from which to extract meaning.3

Given these expectations, educators must surely move significantly beyond thinking of language as a vocabulary list of academic words and collection of grammatically accurate sentences. This raises the question of whether we can hold such high and demanding expectations of all content teachers. For example, in California, there is a required certification for all teachers who teach ELLs, whose preparation also theoretically includes some preparation to support language development. That said, surveys of teachers in California show that they feel most inadequately prepared to teach ELLs, even without piling on the language demands that are made explicit in the new content standards.4 Without much hyperbole, one can safely say that the preparation and professional development of teachers in supporting these rich uses of classroom language is a necessary component of reform if the expectations of the new standards are to be met.

The change in expectations for content teachers implies a change in expectations for ESL/ELD teachers. For one thing, the state standards around English language proficiency will be changing in most states by the end of this year — the state schools chiefs in the waiver states have all signed off to adopt ELP standards that correspond to the Common Core “by 2013.” The WIDA Consortium has already adopted new standards, as has California, all intentionally oriented toward supporting the language demands of the content standards. New York is in the process of revision as well.

A useful crystal ball into what these might look like, collectively, is a document released by the Council of Chief State Schools Officers, known as the “ELPD Framework” (English Language Proficiency Development).5 This document attempts to help states determine whether their ELP standards correspond (a word introduced by the administration in its regulatory guidance) to CCSS and NGSS. The document makes clear that there are different language expectations across content areas and that they should be the targets for the ELP standards. They move us from the four skill domains defined by NCLB (as listening, speaking, reading, and writing) to those defined by classroom functions, further differentiated by discipline. How would the ESL/ELD teacher support this, especially in middle and high schools, where instruction is departmentalized?
The Understanding Language initiative maintains a “rapid response team” of almost 1,000 educators around the country, and we recently circulated a query about effective ESL/ELD practices and challenges. The one word that repeatedly came up in their response was “collaboration” — both for good practice as well as for a challenge.

Practitioners are aware of how difficult it is for teachers to collaborate within much of the current system. And policy pressures for individual teacher accountability based on student outcomes raise even more obstacles. That said, it is clear that effective collaboration is essential. The CCSS standards in literacy in history/social Studies and in science embedded within ELA/literacy requirements already demands that across disciplines. Now, with the pressure for ELP instruction that corresponds to content standards, ESL/ELD teachers need clearly be in the mix. This is a call for action for all teachers, but especially for school and district administrators to create structures and processes that facilitate effective collaboration.

These are interesting times for language educators. Years after landmark court decisions (Lau v. Nichols in 1974) obligated educators to attend to English learners’ language proficiency while providing access to content, our issue — balancing the dualities of language and content on behalf of the educational rights of ELLs — has shifted from the periphery towards the center of policy attention. This is the time when we bring together all that we have learned from practice and research to effectively surf the large wave. The complexities of the education system require that our message be repeated, repeated, and repeated: that collaboration across teachers is essential, that collaboration between second language acquisition experts and teacher trainers/professional development providers is of equal importance, and that the system needs to enable such collaborations to happen in a thoughtful and meaningful way.

Notes
1. An important exception to this is the WIDA consortium of states that developed common English language proficiency standards and assessments, resulting in a collaboration across states that pre-dates the current state assessment consortia operating for the Common Core.
2. See Supporting English Language Learners: A Pocket Guide for State and District Leaders (2012). Washington, DC: American Institutes for Research. Downloaded at http://www.air.org/files/ELL_Pocket_Guide1.pdf
3. Examples of such opportunities may be found in an instructional unit developed by Understanding Language for the middle grades entitled “Persuasion across time and space: Analyzing and producing persuasive texts,” available from http://ell.stanford.edu/teaching_resources/ela
4. P. Gándara, J. Maxwell-Jolly, and A. Driscoll. 2005. Listening to Teachers of English Learners. Santa Cruz, CA: Center for the Future of Teaching and Learning.
5. Downloaded at http://www.ccsso.org/Resources/Publications/T
he_Common_Core_and_English_Language_Learners.html

Kenji Hakuta is the Lee L. Jacks professor of Education at Stanford University and co-chair of the Understanding Language Initiative.

Martha Castellón is the executive director of the Understanding Language Initiative.