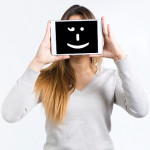 People have been complaining about language being ruined by younger generations for thousands of years. Linguist John McWhorter noted that a Roman scholar in 63 AD complained about Latin students writing in an “artificial language” when they were writing in a language that would later become French. While teen text language, fraught with acronyms and emoticons, may be frowned upon by some members of an older generation, a 2010 study at Coventry University in the U.K. showed a positive association between heavy use of internet acronyms and school literacy. The growing and changing language of the internet has introduced phrases like “LOL” to the Oxford English Dictionary and a “lexicon” of over 700 image-based emoji characters.

The notion of pictures in language is not new. The earliest examples of writing come from pictographic hieroglyphs and Akkadian cuneiform inscriptions from over 5,000 years ago. Francis Bacon and John Wilkes both dreamed of developing a pre-Babel-esque visual language, and Vladimir Nabokov told the New York Times in 1969, “I often think there should exist a special typographical sign for a smile […] a supine round bracket.” In 1982, the computer scientist Scott Fahlman proposed just this, the first emoticon :-) as a way to indicate that the writer was joking. Now, Computer-Mediated Communication (CMC) is a growing linguistic field, with emojis at the forefront. There is a social media app, Emojli, in which users can speak only in emoji, and recently, a crowd sourced project to translate Herman Melville’s Moby Dick entirely into emoji has been completed. There is now a copy in the Library of Congress.

According to a team of researchers at Georgetown University, once you develop an advanced level of reading comprehension, the brain sees a familiar word as a complete image rather than a group of letters to be processed. Emojis and words are similar in this way, but emojis tend to act more like punctuation, providing cues about how to understand the words that came before them, as an exclamation point might. Emoji use, much like dialects or regional accents, can also vary by geography, age, gender, and social class. “They carry with them a fog of meaning. You can’t exactly pin down what any particular emoji means,” says Tyler Schnoebelen, who wrote his doctoral thesis on the subject, “[But] it’s not a story of simplicity, it’s a story of enrichment.”