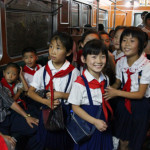 As North Korea announced the creation of its own time zone, the leaders of the “hermit country” have again politically distanced themselves from the rest of the world. However, in the last decade, there has been a huge increase in interest in foreign language education as more trade jobs are opening up and students are trying to connect with outside cultures. “Many people believe that those who work in [foreign] trade have [even] better standards of living than provincial party cadres, so there’s more interest in language skills,” an anonymous source in Yanggang Province told the Daily NK. “If you’re good at a second language you can get into a good university and get a nice job, so the drive among parents to get their children into special foreign language classes is fierce. Parents who want their children to have good language skills and get a solid job will do anything, including selling household goods, to make sure they have support.”

In 2011, Kim Jong-Un instituted compulsory foreign language education beginning from the age of four. For those who have the economic ability, language learning is something that could be potentially life changing. However, poorer citizens attend compulsory language classes with much less motivation, as the likelihood that they will use their language skills in the future is slim. Those who are better off are willing to get their children better language education, “Even if this means paying foreign language teachers multiple times more than the average cost of raising their kids, many don’t bat an eye,” the Yanggang source continued. English is one of the most studied foreign language in North Korea, but with Yanggang Province’s close proximity to China, more people want to learn Chinese so they can tune into and understand Chinese radio and television. The cultural allure is as great as the possible economic benefits to many and as North Korean students gain fluency in foreign languages the world begins to open up for them.