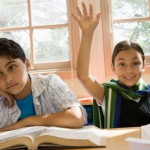 According to the Department of Education, with the addition of 39 new and expanded programs this fall, New York City now has about 180 dual-language public school programs. In Utah, 9% of public school students are enrolled in such programs and in Oregon, 10% with more states, such as North Carolina and Delaware, planning to take part in the trend. “I want two things,” Governor Jack Markell of Delaware (D) told the New York Times. “I want students from Delaware to be able to go anywhere and do any kind of work they want to do, and I also want to attract businesses from around the world, to say, ‘You want to be in Delaware because, amongst other things, we’ve got a bilingual work force.’”

Libia Gil, assistant deputy secretary and director of the office of English language acquisition at the federal Education Department, told the New York Times that while there was no definitive count of dual-language programs nationwide, “there are clear indications of a movement.” Although the primary goal of many dual-education programs is to increase education access and quality for English language learners (ELLs) studies have found increased performance for both non-native and native English speakers. Dual-language programs can also be a vehicle to increase socioeconomic and racial diversity in schools allowing for more culturally aware students. However, not all programs are created equal, and as the demand for dual-language education grows there will be an increased need for quality bilingual teachers as well as a new set of classroom methodology.