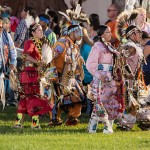 Columbus sailed the ocean blue in 1942 to “discover” the Americas. His arrival has been celebrated by American citizens on the 2nd Monday of October since Columbus Day became a federal holiday in 1937, but recently more and more cities are instead observing Indigenous Peoples Day to commemorate the history and contributions of indigenous peoples across the country. Those against the celebration of Columbus Day believe that the holiday overlooks a painful history of colonialism, enslavement, and discrimination while celebrating a man who launched large-scale genocide. Albuquerque, Portland, St. Paul, and Olympia join at least five other cities in officially celebrating Indigenous Peoples Day this year and shedding light on a population that still feels Columbus’ impact, centuries after his arrival.

“For the Native community here, Indigenous Peoples Day means a lot. We actually have something,” Nick Estes of Albuquerque, who is co-ordinating a celebration on Monday after the city council recently issued a proclamation, told the Guardian. “We understand it’s just a proclamation, but at the same time, we also understand this is the beginning of something greater.” Countries have dealt with their colonial pasts in various ways, with Australia simply instating a National Sorry Day to apologize for the Australian government’s treatment of Aboriginal peoples. Still, some say the celebration of Columbus Day is important despite the problematic aspects of colonialism. Anna Vann told USA Today, “It’s a celebration of when the Europeans came over and started their lives here. We wouldn’t be where we are today if it weren’t for this history.”